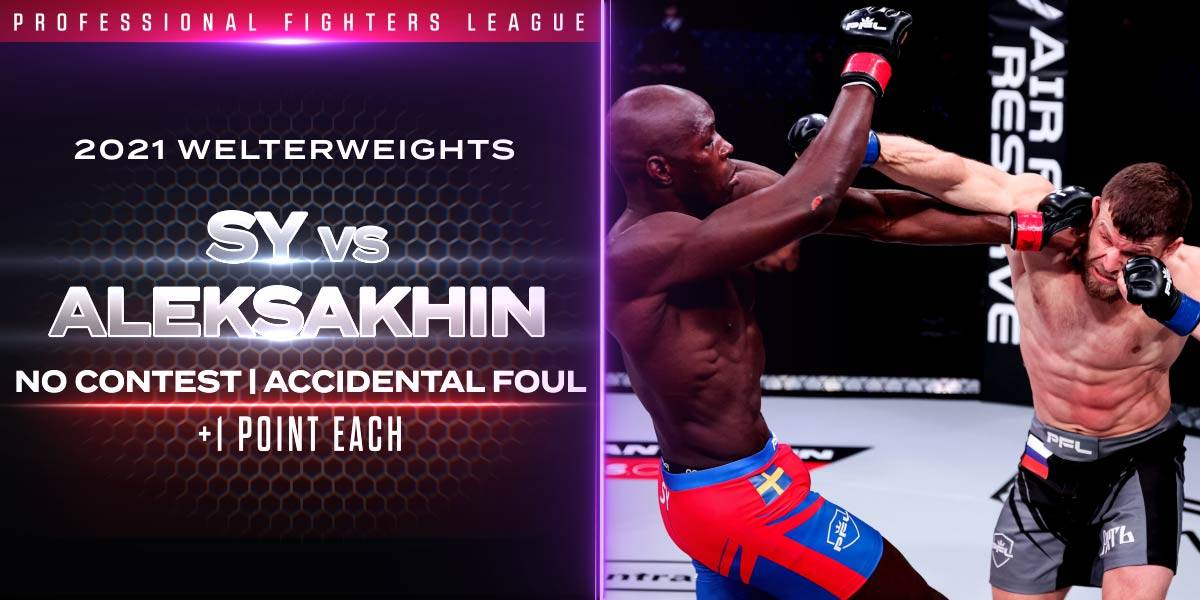 The 2021 PFL welterweight season opened with a match-up between Sweden’s Sadibou Sy (8-5-2, 1 NC) and Russian fighter Nikolai Aleksakhin (24-5, 1 NC). Competing in his third PFL season, Sy possesses the fastest finish in welterweight history, a 17-second stoppage of David Michaud during last season. Aleksakhin entered the season looking to build on the momentum of a victory outside of league action last season.

Sy switched stances repeatedly to keep Aleksakhin on the outside. Aleksakhin bounced on his feet, trying to find a way to close the distance. Sy clipped him with a right kick and right hand, which was countered with a right from the Russian. A lead hook from Aleksakhin connected as he started to find his range. The low kicks from Sy were quickly answered by Aleksakhin. A body kick from Sy was caught by Aleksakhin, but Sy was able to separate. Aleksakhin scored with a spinning back kick to the body of the towering Swede. Sy fired a question mark kick that was blocked by the newcomer. Aleksakhin delivered a wheel kick and looked for a late takedown as the round came to a close.

Aleksakhin went back to work on the feet in round two. He landed a big knee and then looked for a head kick. Sy picked up his volume, turning the body of Aleksakhin red with kicks. An inadvertent eye poke from Sy prompted a pause in the action as the doctor looked at Aleksakhin.

After evaluation by the New Jersey commission, the fight was waved off. Since the fight had not completed two full rounds and the foul was deemed accidental by referee Keith Peterson, the fight was ruled a no-contest. Both fighters receive one point in the light heavyweight standings.