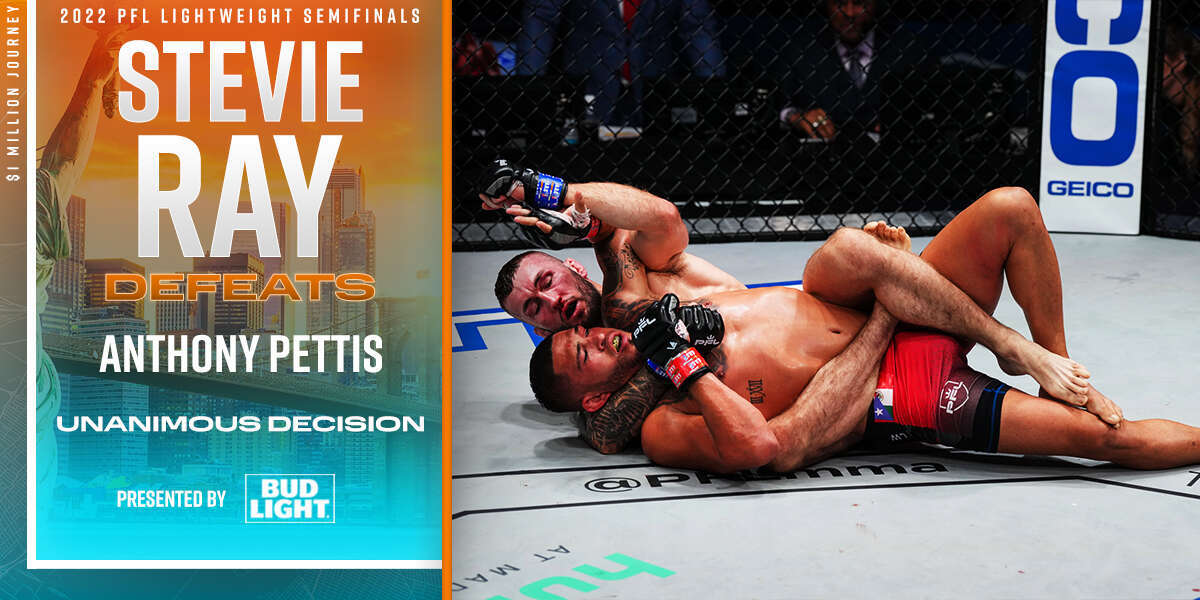 In the headlining bout of the ESPN card, former UFC champion Anthony “Showtime” Pettis (25-13) looks to avenge a regular season loss in an immediate rematch with Stevie “Braveheart” Ray (24-10). This will be an immediate rematch for both fighters following Ray’s shocking upset via modified twister/bodylock in June. In their first meeting, Showtime had already clinched a playoff spot but Ray needed a finish to give himself a chance to compete for 1 million dollars and a PFL World Championship and he delivered just that, stunning Pettis in the 2nd round in what he has described as “the biggest win of [his] professional career”.

A practitioner of martial arts since he was just 5 years old, Pettis would go on to become a champion in both WEC and the UFC. Pettis views this PFL Postseason as a chance to add to his already considerable legacy. Having already clinched a Playoff spot in the 1st meeting between these 2, Pettis upholds that he made a “dumb mistake” which led to the twister, and notes that he did not want to risk injury and his Playoff spot by trying to fight through it. This time around, the stakes are much higher and there will be no excuses!

Another UFC vet, Ray competed 11 times for the promotion before a brief retirement in September 2020. He was offered a new 4 fight deal with the UFC, but was eventually released after visa issues prevented him from competing on “Fight Island” in the UAE.  Ray looks to prove the 1st meeting was no fluke as he continues his charge towards a PFL World Championship.

The final Playoff bout of the evening is underway and Pettis wastes no time getting after it, landing a big right and firing a head kick behind it that Ray is able to avoid.

The fighters engage in the clinch and Pettis seems to be much more respectful of the grappling threat from Ray this time around. After a brief stalemate, they separate and Pettis retakes the center of the SmartCage. The straight right has been landing well for Pettis through 2 minutes, we’ll see if Ray is able to make the adjustment as Showtime lands the right once again off a Ray lowkick.

Pettis lands a heavy bodykick that draws a reaction from Ray before again landing the straight right. Ray senses he needs to turn the tide and shoots in on a double, after some brief fighting for position he’s able to drive and finish the takedown and winds up in the closed guard of Pettis.

Ray is attacking the north south choke and Pettis is in danger! It’s getting tight but the 10 second clapper hits and Pettis explodes back to his feet, landing a short jumping knee on the break! What an end to the round!

The 2nd round begins and Pettis lands another heavy body kick before firing the straight right he’s had so much success with tonight. Pettis lands a nice head kick but Ray is able to catch the leg on the way out and engage the clinch. Ray briefly takes the back of Pettis before Pettis secures the wrist, turns his body into Ray, and breaks.

Pettis again lands the right cross and Ray responds by changing levels and looking for the takedown, driving Pettis back into the SmartCage and working for position before giving up and retaking the center. Pettis is doing a good job in the grappling exchanges but needs to be careful as Ray creates a chance to take the back and does!

Ray takes it to the mat and he’s on Pettis’ back with the body triangle locked in. Pettis is attempting to break the body triangle with his hands but needs to be careful not to expose his neck to the man who submitted him less than 2 months ago.

With 90 seconds remaining in the round Ray is still firmly in control with the bodylock in as Pettis fights the hands to protect his neck. Ray briefly looks for the mount before changing his mind and staying the course with the back mount.

Ray isn’t going to finish here as the round winds down but he has to feel good about his performance so far.

Pettis will very likely need a finish here as the final round begins and he seems to know it, loading up on a big right hand to open the round as the crowd urges him on.

Pettis lands a nice front kick before resetting and going back to the body kicks and straight right he’s found success with all night. Ray uses an overhand right to change levels and look for a takedown but Pettis is wise to it this time and fights him off.

Once again Pettis lands a heavy body kick and one has to wonder how those are going to take their toll as the fight winds down. Pettis lands a short superman punch and fires a high kick behind it before Ray again clinches with the single collar and looks for a takedown.

Once again Pettis is wise to it and breaks and resets.  Ray throws a low kick and Pettis returns with the straight right. Both men land as Pettis seems to be pushing the pace knowing he needs a finish. Pettis lands the body kick once again but this time Ray catches it and looks for the single leg before settling for the underhook in the clinch and starting to work to take the back of Pettis.

With a minute remaining, Ray is backpacking Pettis on the feet but can’t seem to finish the takedown he wants so badly. With just over 30 seconds left Pettis manages to break and rushes to the center of the SmartCage.

OH! Pettis lands a low kick that sweeps Ray clean off his feet but he quickly recovers, popping back up to finish the fight at range.

Stevie Ray proves the 1st fight was no fluke and beats Anthony Pettis once again to punch his ticket to the 2022 PFL Championship!