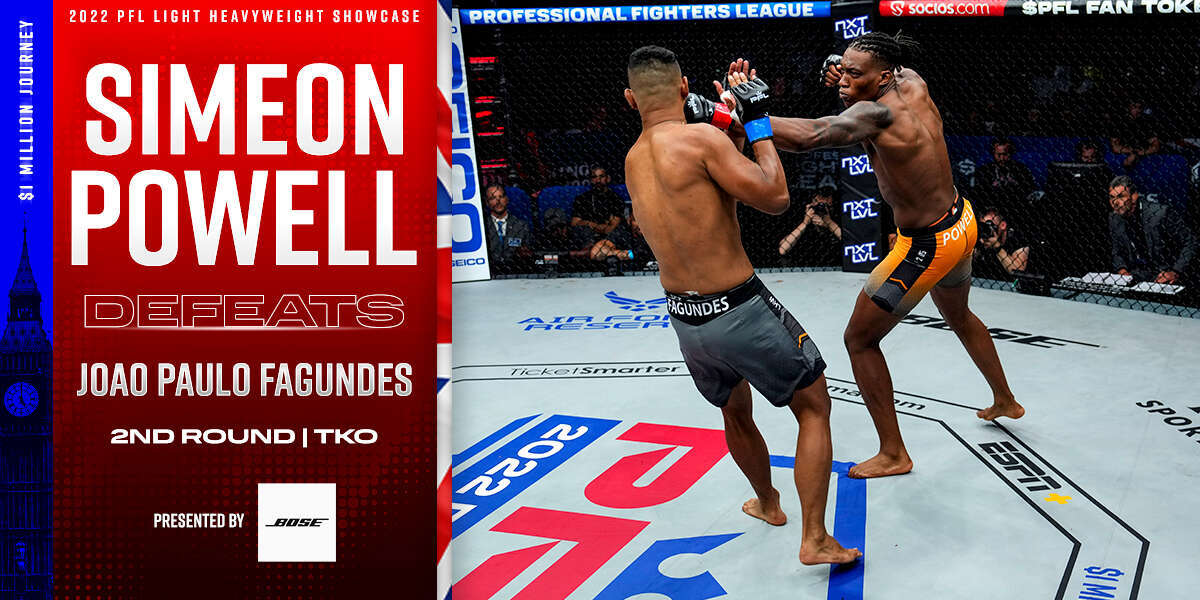 Kicking off the ESPN card, undefeated London native and 2022 PFL Challenger Series contract winner Simeon Powell (6-0) takes on a fellow undefeated up and comer in Joao Paulo Fagundes (7-0) in what promises to be an exciting affair. With 10 finishes in 13 pro bouts between the 2 of them, it’ll be a surprise if this one sees the judge’s scorecards.

The main card is underway and the London crowd is behind Powell early! The fighters exchange low kicks in the center of the SmartCage as they feel each other out and try to find the range. Powell lands 2 heavy kicks to the lead calf of Fagundes that seem to already be impacting his movement slightly.

Powell is starting to feel himself now, landing a stiff jab before slipping off a big right from Fagundes and firing another low kick. Fagundes is swinging big but can’t seem to find Powell as Powell bounces around the outside and continues to chew up the lead leg of Fagundes.

Powell continues to stick that jab and he’s in and out before Fagundes can return fire.  Tired of waiting for an opening, Fagundes bullrushes Powell behind two power hooks but Powell quickly reverses position and secures double underhooks along the SmartCage.

Fagundes secures the bodylock and circles off, landing a nice knee to the body before Powell reestablishes position.  Powell lands two short uppercuts to the body and breaks, retreating to the center of the SmartCage and getting right back to that lateral and head movement that have made him so hard to hit so far.

Powell partially lands a head kick and they’re swinging now! Both men land in a big exchange before Powell decides to look for a takedown and quickly secures it, landing in top half guard before Fagundes is able to secure full guard and Powell postures up and lands a massive right hand with two more behind it to end the round!

Fagundes may very well have been in deep trouble had the round not ended.

We open the 2nd round and once again Fagundes is walking down a very evasive Powell, though he does land a nice right hook in the first exchange.  Powell shoots a single leg, gets stuffed, but quickly chains into a double leg and drives through Fagundes to finish it. Powell is working in the closed guard of Fagundes briefly before getting back to his feet and threatening the ground and pound.  The ref stands them up and Powell is right back to chopping the tree! Powell drops Fagundes with a low kick and that leg is compromised BAD!

Fagundes struggles to get back to his feet after the knockdown, comes forward, takes another heavy calf kick and that will do it as Fagundes cannot continue!

What a performance from Simeon Powell in his hometown as he showed a little bit of everything before ending the fight via low kick!