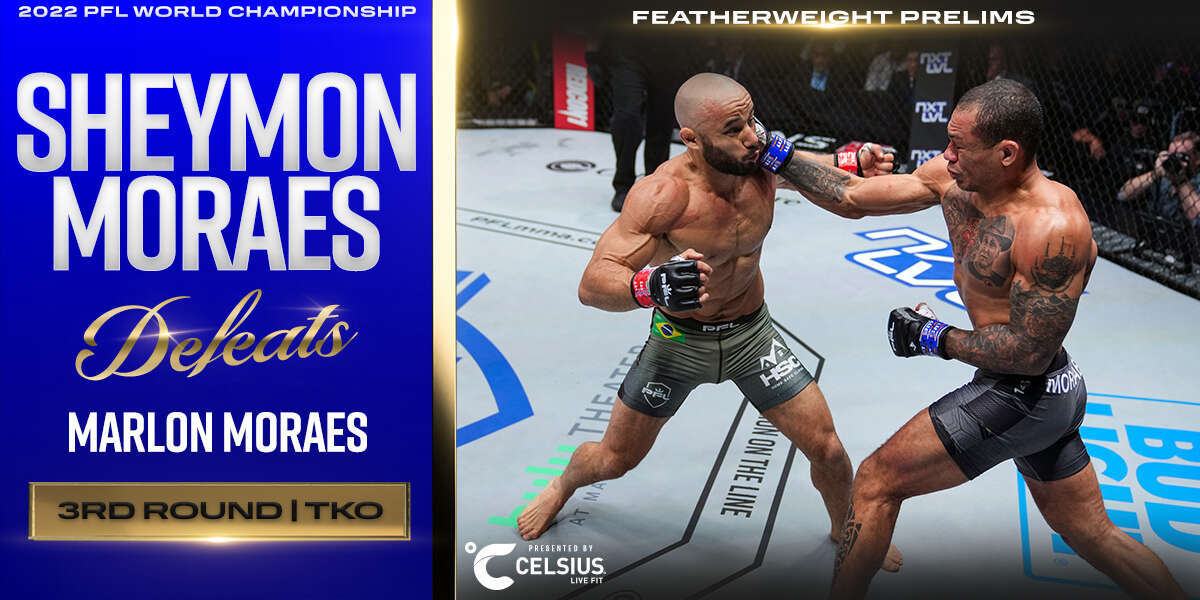 “Magic” Marlon Moraes (23-10-1) makes his PFL debut against well seasoned Sheymon Moraes (14-6) in a rematch from their respective World Series of Fighting days. In the first meeting, Marlon defended his WSOF Bantamweight Title by stopping Sheymon in the 3rd round by rear naked choke. Sheymon looks to return to form after dropping a decision to Lance Palmer in June, ending a 3 fight win streak.

The fight begins and Sheymon quickly takes the center of the SmartCage.  Marlon is using footwork and head movement to try to find openings, rushing in and landing a nice lead hook before resetting and throwing a low kick that doesn’t connect.

Sheymon hangs out in the pocket just a second too long and Marlon again lands a nice lead hook before changing levels and taking Sheymon down to the mat where he should have the advantage.

Marlon is heavy on top in half guard and looks to be attacking an arm triangle as Sheymon attempts to scoot back to the cage and build a base to get back to his feet.

Marlon is still heavy on top but hasn’t done much damage with the position as Sheymon is finally able to get his back to the cage and get back to his feet.  Sheymon seems to be having trouble finding the range as Marlon lands a nice uppercut.

Once again Marlon lands a straight right that gets Sheymon moving backwards.  Marlon lands a big right hand over the top but Sheymon is doing a better job taking his head off the centerline, but it’s been mostly one way traffic so far.

Again Marlon finds a home for that power left hook but Sheymon recovers and clips him on the way in! An exciting end to the round.

Round 2 begins and Sheymon seems to be more aggressive off the bat, letting the hands go and landing before they reset.  Marlon takes his cue and shoots a power double leg, taking Sheymon down effortlessly and landing in the closed guard.

Again, Marlon seems content to ride out his position without doing a tremendous amount of damage as the crowd calls for more activity.  Marlon attempts to pass but Sheymon stays strong in the guard and Marlon responds by posturing up for a big right hand that lands flush.

Sheymon works his way back to the SmartCage and back to his feet with just under 2 minutes remaining in the round.  Marlon again lands that power left hook over the top, stunning Sheymon for a moment before initiating the clinch.

Marlon is able to take the back briefly but can’t do anything with it as the round will come to a close with both fighters in the clinch.

The 3rd round begins with a heavy inside leg kick from Sheymon and a nice jab behind it.  It’ll be interesting to see if the cardio problems that have plagued Marlon in the past follow him to the PFL.

Sheymon lands another big right and they reset before Sheymon lands a BOMB and drops Marlon! Marlon attacks a leg lock looking to recover but Sheymon pours on the damage! Marlon attempts to get back to his feet just to get clipped and dropped again and the ref has seen enough! What a comeback for Sheymon Moraes!