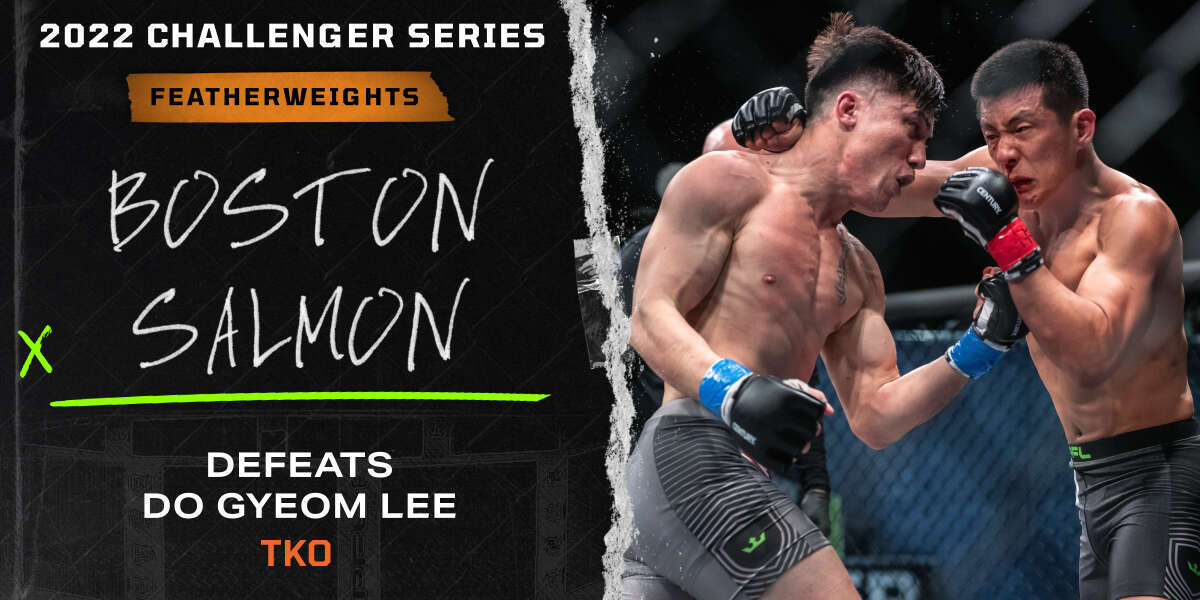 Who doesn’t love a battle between two dangerous knockout artists?

Were fans treated to KO number 10 when the lights went down?

Here’s what went down:

Leg kick finds the mark immediately for Lee. And another. Lee blitzes, and Salmon avoids any damage, countering nicely in the process.

Salmon looks for an inside leg kick, but it slides high and catches Lee in the groin. He’s in pain and taking his time to recover.

All clear, and they’re back at it.

Beautiful left hook connects for Lee. That one caught Salmon’s attention for sure.

Under two minutes left in the round, and Salmon lands a huge right after a stumble from Lee. Kenny Florian liked that one. Lee’s OK, though, and he regroups before continuing to push forward.

Nice check hook from Salmon catches Lee on the way in, but he remains aggressive, blitzing forward once again. These dudes look extremely quick and crisp here with 30 seconds to go in the round.

What a combination from Lee. That looked like a video game with a mix of punches and kicks. But Salmon defended nicely and avoided any serious danger. We’re off to Round 2.

They’re back at it, and the action hasn’t slowed. Another nice left upstairs from Salmon, followed by two heavy body shots. Lee felt those –– and he didn’t enjoy ‘em.

Boston Salmon now on the hunt for a 2nd round finish! Will he pull it off?#PFLonFuboTV LIVE NOW
🇺🇸 https://t.co/R67yD8VVFQ
🌍 https://t.co/StPf5kcxnW pic.twitter.com/BY8GQa3GzH

Salmon let off the gas a bit, and Lee capitalized, turning on the aggression once more and keeping Salmon on his heels. Front kick finds its mark for Lee, followed by a leg kick into a body kick.

Lee with another body kick. They clinch briefly in the center of the cage, and Salmon lands two nice knees. This is a tough round to score, with both men chipping away and finding short bursts of success.

It seems both fighters have also slowed a bit, but that doesn’t stop the aggression. They swing until the bell sounds and sends us to Round 3.

There’s some issue with Lee in the corner. It appears to be a mouth/jaw issue, but it’s unclear. Lee’s corner calls in the doctor, and this fight is over.

Salmon and his team celebrate as they wave it off before Round 3 begins.

“It was a straight left down the pipe,” Salmon said of the shot that injured Lee. “When I landed that shot, I could see his mouth. I don’t know what happened with it, but I could see the blood gushing out, [and] I knew something was wrong.

“I don’t blame him for not coming out.”