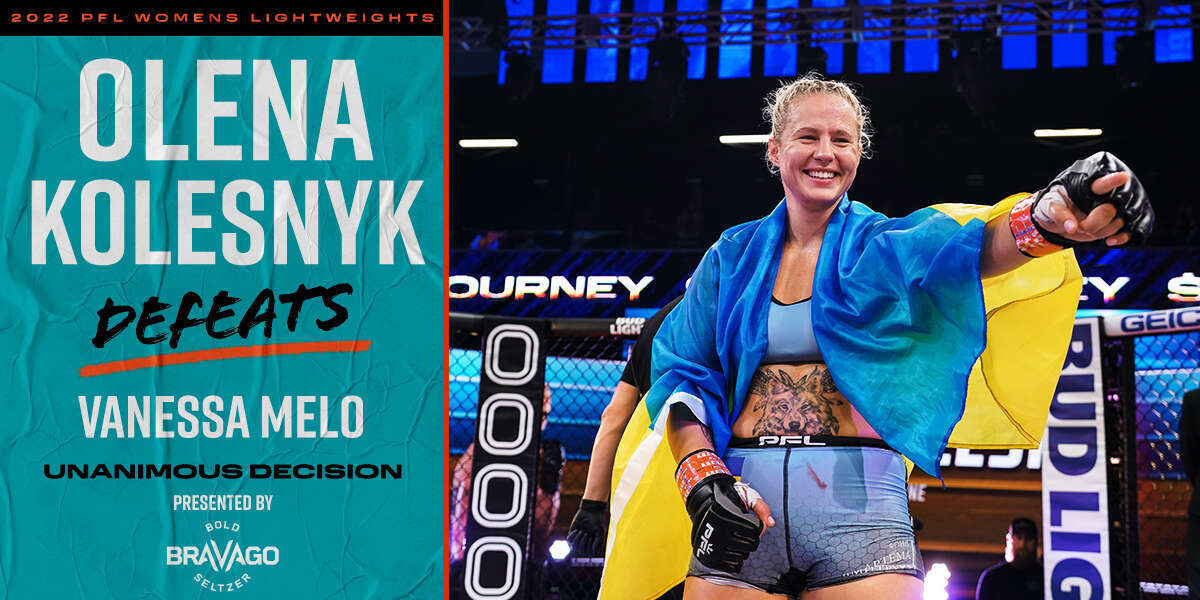 Kolesnyk started her season with a split decision win over the previously unbeaten Abigail Montes, netting her 3 points and putting her in 4th place in the standings, good for the final playoff spot for now. Kolesnyk will look to cap off an improbable underdog run to this year’s PFL Playoffs, which saw her flee her war torn home country of Ukraine to ensure she would be able to train and compete in the PFL this season. Kolesnyk will clinch a playoff berth with any finish.

Across from Kolesnyk will be UFC veteran Vanessa Melo who was released from the promotion in February of this year despite winning her last bout.  Melo was unable to secure the victory in her PFL debut, dropping a decision to Martina Jindrova. Melo will need an early finish to keep her playoff hopes alive.

The fighters touch gloves and PFL 6 is officially underway!  Kolesnyk is noticeably bigger and longer and is using it early, probing with her jab and landing a nice counter hook early.

Kolesnyk is doing a good job mixing up her offense early, building off her jab with low kicks and teeps to the body.  Kolesnyk goes for the high kick and Melo is able to catch it and sweep Kolesnyk off her feet.

Instantly Melo is attacking the back with 1 hook in as Kolesnyk uses the fence to defend the other hook and quickly work back to her feet.  There seems to be a strength advantage to go along with the size advantage for Kolesnyk.

They break from the clinch and get back to the center of the SmartCage as Kolesnyk circles away from the power hand of Melo and looks for her openings. The fighters trade low kicks back and forth as we hit 2 minutes to go in the round.

Kolesnyk lands a nice left cross as we hit 90 seconds remaining before the fighters continue to circle and look for openings. Melo wisely changes levels and starts digging for a takedown but Kolesnyk is able to reverse for a takedown of her own and lands in top side control with 30 seconds remaining.  Kolesnyk attacks a scarf hold as the round winds down but she won’t have enough time to finish it as a competitive 1st round comes to a close.

Olena Kolesnyk gets the take down and ends the 1st round on top! Round 2 coming up...#2022PFL6 LIVE on ESPN+
🌎 https://t.co/jPNvomkWj8 pic.twitter.com/Npo2NbJh8R

Round 2 is underway with more of the same so far as Kolesnyk circles around the outside waiting for an opportunity.  Melo has struggled to put offense together early, having trouble landing on the taller, longer Kolesnyk.

Melo misses on an overhand right and takes a short check hook from Kolesnyk in return. They circle once more before another big exchange sees both woman land some hard punches in the pocket.

Once again Kolesnyk is building off her jab, but she would be well served to throw some power behind it. Melo seems to be showing some more urgency here and is more willing to go first as both women throw and miss punches and Kolesnyk follows it up with a heavy kick to the body, the best strike of the round so far.

As we hit 2 minutes remaining in the round, there has been a clear theme so far with Melo holding the middle of the SmartCage and Kolesnyk circling off her power hand once more.  Melo commits to a jab which Kolesnyk slips and counters with a heavy left hook, landing flush.

With 30 seconds remaining, Kolesnyk throws the same combo she found success with earlier, missing the punches but landing another heavy body kick.

Melo landed a bit more volume in the round but it was Kolesnyk landing with power.

Our 3rd round is underway and Melo will likely need a finish to win the bout at this point.

Kolesnyk has had a strong gameplan in this bout, establishing her jab to start every round and then building off of it.  Melo has also had significant trouble defending the kicks as Kolesnyk fires the same body roundhouse once again.

Once again Melo throws an overhand right rushing in, misses, and eats a check hook for her troubles. Kolesnyk has done a fantastic job countering tonight.

As Melo pursues and attempts to close distance, Kolesnyk lands another nice left cross before Melo successfully pummels into the clinch and starts working for underhooks.  Alert to the danger, Kolesnyk pummels for double unders and is able to circle off the SmartCage and get the fight back to distance, where she has been winning the exchanges.

Kolesnyk also appears to be the fresher fighter at this point and is still chasing a finish, throwing high kick combos as she attempts to clinch a PFL Playoff spot.  Again, Kolesnyk is able to land that body roundhouse kick which has been the most consistently effective strike of the fight for either fighter.

As we hit 1 minute remaining in the fight, Melo will need to sell out for a finish but Kolesnyk is not letting her get into the pocket and giving her a chance to land a fight ending sequence.

The bout comes to an end and both women embrace.  With that, Melo has most likely been eliminated from playoff contention and Kolesnyk will be watching the rest of the night’s action intently.

Olena Kolesnyk sweeps Vanessa Melo, giving her 6 points and keeping her playoff hopes alive.  Kolesnyk will make the playoffs barring multiple finishes by the rest of the women competing tonight.