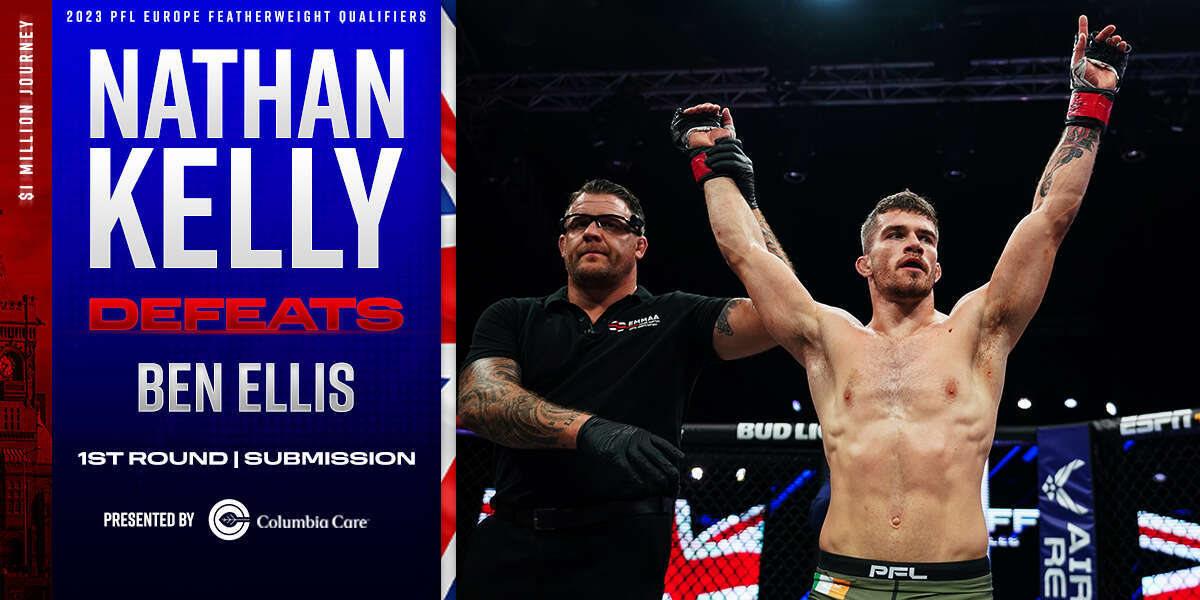 Kicking off the ESPN portion of the card we have the first ever PFL Europe Qualifier between two very game Featherweights! Ireland’s Nathan Kelly (5-2) takes on Wales’ Ben Ellis (4-1).  Following a nearly 3 year layoff (wherein he earned his BJJ Black Belt), Kelly returned to the sport emphatically, winning four fights from 2021-2022. Ellis meanwhile enters this fight with a boxing base, trained by his grandfather who was a professional boxer.  Ellis also grew up a few minutes from Cardiff and will certainly have the crowd behind him.  The winner of this bout will secure a spot in next year’s PFL Europe Series.

Oh my! Kelly comes out swinging and landing BIG!  After teeing off for the first 15 seconds, Kelly engages in the clinch looking to change levels and take Ellis down, a bit surprising after such a strong start with the striking.

Kelly is absolutely touching Ellis up and landing nearly everything he throws! Ellis wisely snatches the double underhooks and drives Kelly back into the SmartCage but he can’t keep the position long as Kelly breaks and goes right back to landing power shots at will.

The speed and accuracy in Kelly’s hands is quite impressive early as Ellis makes a mistake and gives Kelly his back! Kelly quickly attacks the neck and looks for the rear naked choke! Ellis is doing a good job fighting the top hand and preventing Kelly from putting the squeeze on, but only temporarily as Kelly adjusts, locks in the choke, and finishes Ellis in dominant fashion!