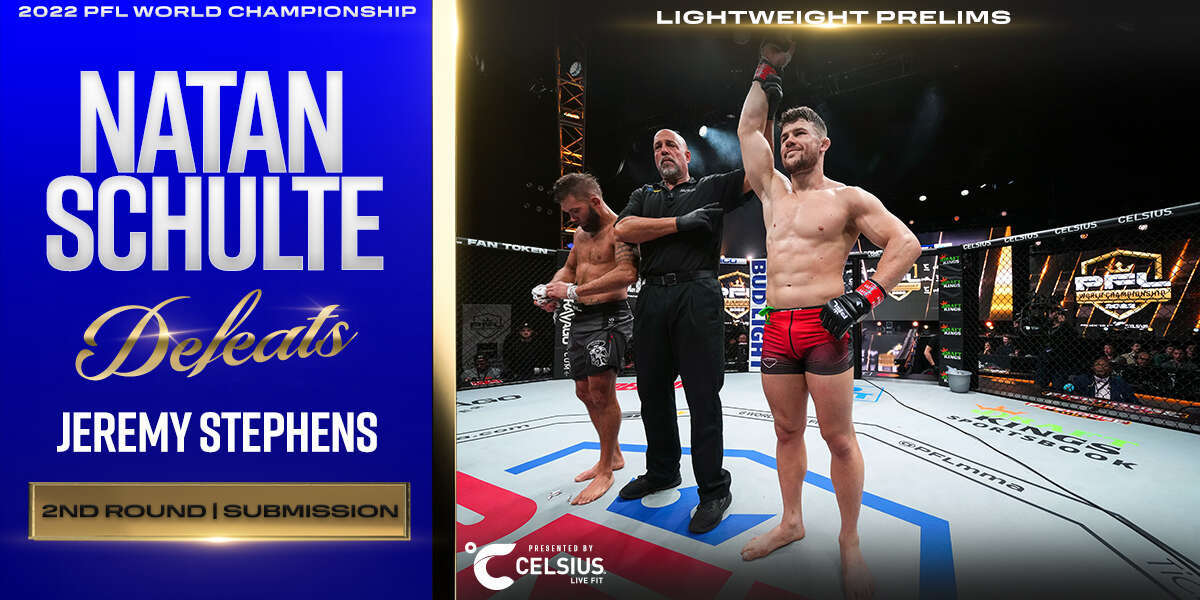 In a bout with fight of the year potential, fan favorite Jeremy Stephens (29-20) meets 2x PFL Champion Natan Schulte (22-5-1). Both known for relentless forward pressure and finishing ability, this fight should absolutely produce some fireworks.  Notably, Schulte has now missed the PFL Playoffs for 2 straight years after winning back to back Championships and will certainly be looking to make a statement he can carry into next season tonight.

The bell rings and both fighters are swinging big early with Schulte firing a low kick and Stephens returning with a combo of hooks.  Schulte then changes his mind and decides to shoot, quickly taking Stephens down and establishing top side control.  Stephens is able to recover half guard but Schulte is staying heavy on top and is now attacking an arm triangle.

Stephens will have to pass to the opposite side to finish but the choke is in tight as Schulte manages to pass over the leg into 3 quarter mount.  The choke is only getting tighter but Stephens is hanging in and defending well.  After a grueling 2 minutes, Stephens frees his head and gets out of danger for the moment.

Schulte quickly passes back to the 3 quarter mount and attacks the choke once again before taking the back and unloading some big ground and pound shots.  Stephens attempts to create a scramble but gives up his back once again and this time Schulte gets both hooks in and postures up to do some damage.

With 50 seconds remaining Schulte snatches the neck and puts the squeeze on! Miraculously, Stephens escapes again and manages to return to his feet as the round ends.  Stephens lands a barrage of punches and knees to close out an exciting round.

Round 2 begins with more of the same as Schulte quickly secures a body lock takedown and lands in top half guard.  Stephens quickly gets to a hip and attempts to create some space but Schulte does a good job staying heavy on top and keeping his dominant position.

Stephens briefly gets back to his feet before being dragged back to the mat as Schulte just smothers him and begins attacking the arm triangle again.

This time it’s in tight and Schulte has the angle and we’ll get the tap from Stephens!