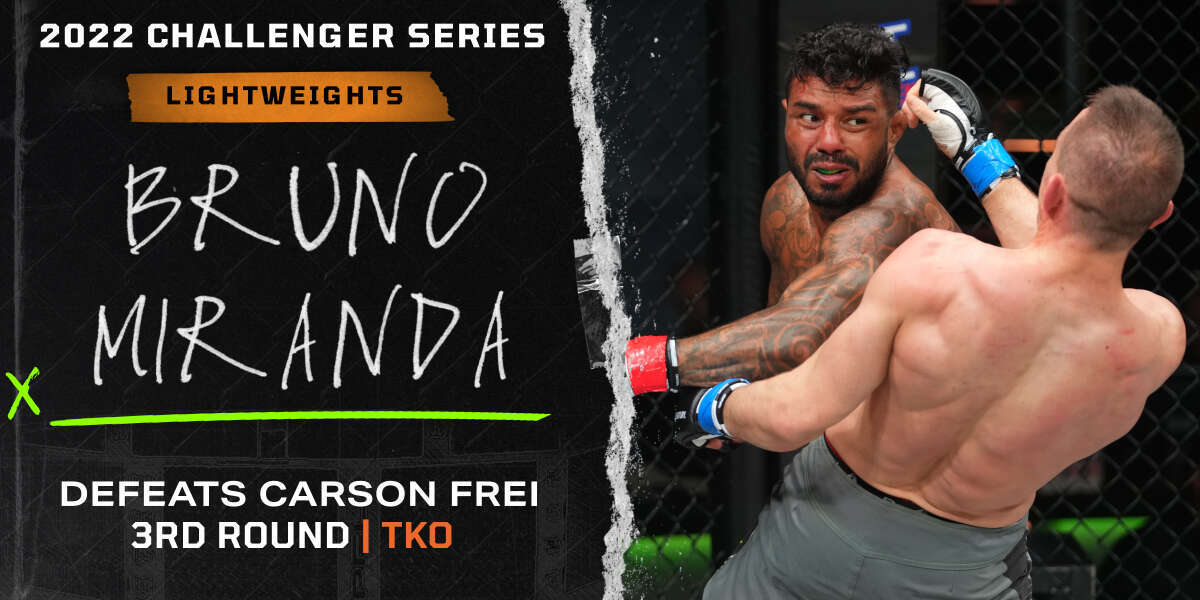 And I have some good news on that front: Bruno Miranda (13-3) made his long-awaited U.S. debut Friday evening during Week 5 of the 2022 PFL Challenger Series, taking on Oregon’s Carson Frei (9-4).

Miranda has pro kickboxing and pro Muay Thai experience, and it shows, as eight of his 13 career pro wins have come via knockout. Not only that, but he’s currently on a hot streak, winning four in a row and finishing three of his last five wins in the very first round.

Is another highlight on its way?

Touch of the gloves, and they immediately exchange leg kicks. Miranda with some hyper-fast hands early, but Frei is more than happy to stand and trade thus far.

An overhand right-left hook combo catches Frei’s chin, and that certainly got his attention. Now, Frei bullies forward in the clinch. Miranda looks for the hip toss, and they hit the mat, but only for a moment.

They separate, and Miranda’s looking lethal here. Another strong leg kick from the Brazilian. Frei shoots, and he secures the takedown. Perfect timing on that one, as it just appeared the fight was getting uncomfortable for him on the feet.

Frei takes the back, but Miranda explodes, turns, and stands. They’re back to trading strikes, and Frei lands a nice right hand. Push kick followed by a head kick glances for Frei, and Miranda counters with a leg kick.

Big left hook lands for Miranda and drops Frei, but it’s a flash knockdown, and he composes himself quickly, forcing a clinch. They separate, and Miranda gets back to work with the leg kicks.

Frei shoots from the outside again, and the round ends with the two men pressed against the cage.

Push kick from Frei to open this round. He’s looking aggressive early, closing the distance. Miranda just misses with a powerful left hook. Now, Miranda goes to the body with a left and follows it up with a series of hard leg kicks.

Frei’s leg is getting annihilated here, but he’s wearing it well, pushing forward, and returning fire. He’s showing a ton of toughness and heart, no doubt about that.

Another push kick from Frei, and Miranda’s hands looks just a touch slower and a touch out of range here. He’s not landing quite the same as he was in Round 1.

And right as I say that, Miranda proves me wrong, catching Frei with a crispy combo that momentarily stuns him and sends him to the mat. Miranda pounces, but Frei’s recovered, and now he’s bulldozing forward to initiate a clinch.

Accidental clash of the heads, and the referee calls time. Miranda’s OK, and the fight restarts, with Frei immediately going back to work and pushing forward.

They clinch against the cage but separate with 40 seconds left in the round. Miranda right back to throwing bombs, but Frei neutralizes it and clinches to close out Round 2.

It definitely appeared Miranda lost some pop as that round wore on. Is Frei primed for a comeback?

Another touch of the gloves immediately followed by four leg kicks from Miranda and a pair of body kicks. Huge right hand from Miranda drops Frei, and he’s in all sorts of trouble here.

He’s back to his feet, but he’s not all there yet, and Miranda senses it. He’s back down, and Miranda asks him to stand. Frei is hurt here. Badly. Not sure how he’s still standing, but he’s upright against the cage.

And he’s down. For good.

A massive uppercut gets through and ends the punishment. Miranda makes his American MMA debut in style, knocking out Carson Frei in Round 3.

So much for gassing, eh?

Oh, you probably want to see that uppercut, huh?

ITS ALL OVER!! Bruno Miranda gets it done in the 3rd round!#PFLonFuboTV pic.twitter.com/0A5vYVPUJt