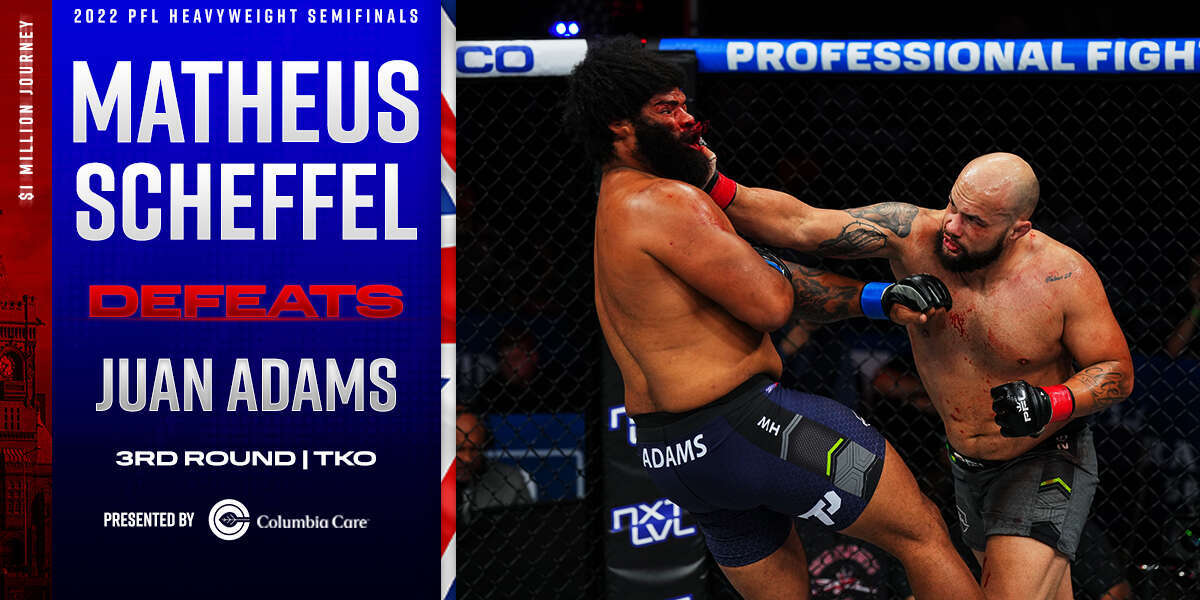 In our first PFL Heavyweight Playoff bout, late replacement and #5 seed Juan Adams (10-4) meets another Playoff alternate in #5 seed Matheus Scheffel (16-8) in a clash of heavy hitters.  After Bruno Cappelozza and Denis Goltsov were both forced to withdraw, Adams and Scheffel were handed the biggest opportunities of their professional careers and an opportunity to compete for 1 million dollars and a PFL Championship. Scheffel enters this bout on the heels of handing reigning Champion Bruno Cappelozza his first ever loss under the PFL banner in impressive fashion, earning himself a nomination for the Fighters Only Comeback of the year. Adams, meanwhile, was a late addition to the PFL roster this season and dominated Sam Kei in his only Regular Season appearance to secure his spot as an alternate.

The opening bell rings and Adams is coming forward early before changing levels and looking for the takedown.  He can’t secure it and Scheffel lands a nice knee on the break.

Early on it seems Scheffel has the speed advantage as well as the striking advantage but Adams has been relentless with the wrestling pressure early, once again digging for a high single as Scheffel stays wide and keeps his center of gravity low.

Adams is able to elevate the leg and get the fight to the ground at last where he goes to work peppering short punches as Scheffel attempts to build up his base and work back to his feet.

Adams is staying heavy on top early but eventually Scheffel is able to get back to the feet and instantly lands a massive right hand that gets the attention of Adams.  Adams seems to be a little more labored in his movement now and one questions how much energy he expended to get that first takedown.

It’s no matter though as Adams once again secures a takedown and starts working for position, but Scheffel does a great job working back to his feet once more.

Scheffel breaks and circles off, firing a heavy low kick before a reset. Scheffel lands a MASSIVE left hook as the round winds down and Adams appears wobbled! That was just the exclamation point Scheffel needed to possibly steal a highly competitive round.

Adams again looks to grapple immediately, likely looking to neutralize the striking advantage of Scheffel.  Scheffel is able to quickly break and Adams appears to be the more fatigued fighter.

Scheffel lands a stiff jab that snaps back the head of Adams but Adams is undeterred, moving forward and landing a nice right hand into a level change but Scheffel quickly breaks and rips a hook to the body of Adams.

Adams is showing a significant amount of damage on the face now and appears quite labored in his movement. Scheffel needs to come forward here as he continues to move straight backwards and find his back against the SmartCage.

Now Adams is able to land a big double leg slam but already he’s having trouble keeping the position as Scheffel starts to work back to his feet, listening to directions from his corner who he is directly next to.

Scheffel again gets back to his feet and breaks, firing a stiff jab and an overhand right that both get through. Scheffel continues to work the body here in an attempt to further empty the gas tank of Adams.

Scheffel is having tremendous success with his jab but now Adams comes forwards and they trade punches against the cage before Adams drops his level again and is able to finish a single leg.

In what is becoming a recurring theme, Adams seems unable to actually secure position as Scheffel quickly returns to his feet and lands 3 BIG hooks to close out the round, with Adams clearly wobbled at the closing the bell!  That fight may have been over had the round gone another 20 seconds or so.

The final round begins and it’ll be interesting to see how urgent Scheffel is knowing he had Adams hurt at the end of the 2nd there.  Scheffel with a beautiful slip and rip uppercut but Adams just eats it!

Scheffel is starting to land heavy now after refusing a break in the action for a low blow, a wise choice to not give Adams time to recover.

Adams shoots again in open space but can’t do anything with it as they’re back to the center of the SmartCage and trading as Scheffel lands another big left.  The big question now seems to be will Adams survive the remaining 3 minutes but anything can happen in the SmartCage!

Again Scheffel lands a stiff jab that snaps Adams’ head back and the right eye of Adams appears to have swollen almost completely shut at this point. Adams changes levels and is quickly stuffed and tagged with a left hook right on that closed eye.

90 seconds to go and it’s all Scheffel as the ref warns Adams to fight back! Adams stumbles back to the SmartCage and Scheffel lands once more and the ref has seen enough, Matheus Scheffel is going to the PFL Championship!

Matheus Scheffel imposes his will on Juan Adams and stops him in the waning moments of the 3rd round to advance to the PFL Championship!