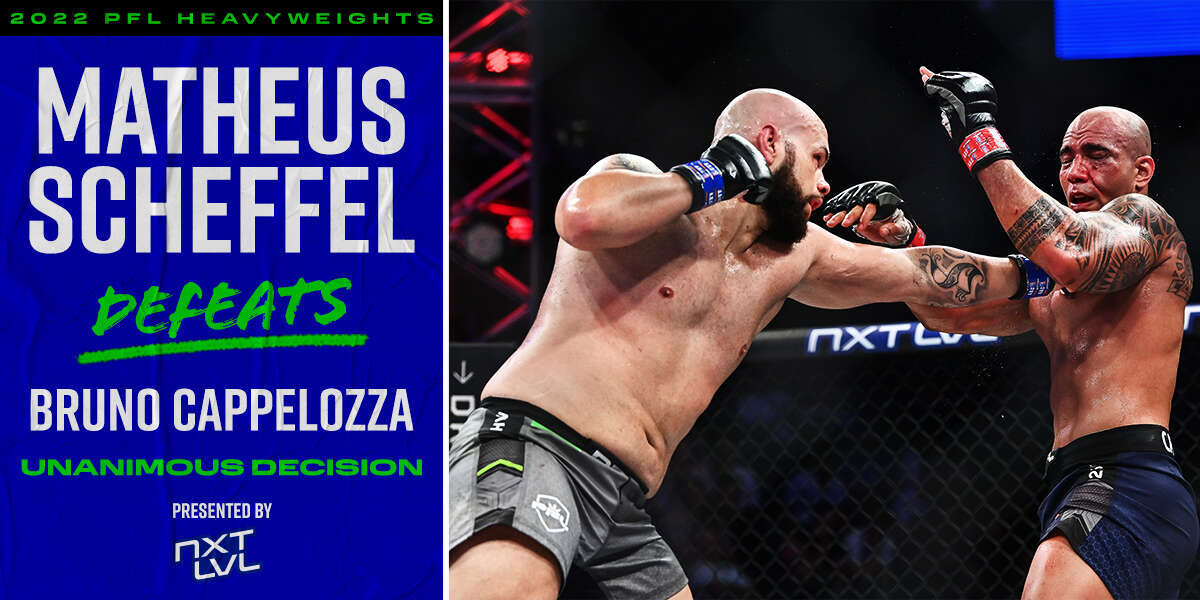 Main event time already! 2021 PFL Heavyweight World Champion Bruno Cappelozza (15-5) looks to keep his 5 fight win streak going against Matheus Scheffel (15-8).  Cappelozza won his first bout of the regular season in convincing fashion with a Quick Six over Stuart Austin.  Scheffel, meanwhile, was knocked out by Ante Delija in his opening bout of the regular season and would need a 1st round finish to have any chance of making the playoffs.

Cappelozza has established himself as one of the most electric Heavyweights in the sport since coming to the PFL, putting on a fight of the year contender in last year’s World Championship bout with Ante Delija.  Any win will see Cappelozza clinch a playoff spot and he can secure the top seed with a 1st or 2nd round finish.

This will only be Scheffel’s 3rd outing at Heavyweight, and following a loss in his first bout he’ll need to take out Cappelozza in the 1st round to have any chance at the playoffs, a tall task considering Cappelozza has yet to be finished in his time in the PFL.

Our main event is underway and Bruno is coming forward early with a very apparent hand speed advantage.

Scheffel is swinging big and wild early but has yet to connect while Cappelozza seems content to take a more measured approach and pick his spots. 90 seconds in and we’ve had a lot of feeling out and whiffs from Scheffel and one can’t help but feel that Bruno is just waiting for an opening to absolutely explode.

Scheffel however is doing a good job controlling the range and walking Cappelozza down and he’s starting to have some success with the low kicks as Bruno returns with a deep to the body.

Cappelozza is making a point to work the body early while Scheffel continues to find some success with the low kicks but struggles to land punches upstairs. Cappelozza lands a nice 1-2 but Scheffel finally lands clean and stuns Cappelozza briefly!

Scheffel lands again and Cappelozza is hurt bad! Scheffel opens up and unleashes a barrage of punches from every angle as Cappelozza attempts to get his legs back under him.  Cappelozza is cut under his eye and nose but manages to land big in an exchange and buy himself some time.

The round ends with Cappelozza finding some success but Scheffel certainly got the better of those exchanges.

After some perhaps unexpected adversity for Bruno in the 1st, we’re back at it and those low kicks Scheffel banked early seem to be affecting Bruno’s movement and footwork.

Cappelozza lands a BIG body shot but Scheffel keeps coming, landing a hook in the exchange before resetting. Scheffel feints an uppercut and then comes over the top, landing a hook as Bruno is having trouble keeping his back off the cage and staying out of the pocket.

This is Heavyweight MMA! Tremendous power from both men reminding us why nothing is a sure thing in this division.  Cappelozza now seems a bit timid as he checks the same low kick that gave him trouble in the 1st and returns with a low kick of his own.

Scheffel is still the fighter coming forward and controlling the range, cutting off the cage well and keeping the fights where he wants it. Cappelozza seems to be getting more comfortable now and getting off some more offense but it’s still Scheffel leading the dance.

As the round winds down Cappelozza lands a big hook to cement a much more competitive round 2. It’s either 1-1 or 2-0 Scheffel, Cappelozza may need a finish here if he wants the win.

Scheffel’s corner has him fired up and his body language is significantly better than Cappelozza’s at this point.  As the round begins Cappelozza comes out urgent and aggressive landing a big right hand before Scheffel is able to retake the center of the SmartCage and get back to controlling the range and distance.

Both men are landing big here a minute into our final round of the night! Cappelozza is still working the body and he checks a low kick before eating a heavy one from Scheffel again and that lead leg is chewed up at this point.

As we approach the midway mark of the round it’s still very much up for grabs as Cappelozza changes levels but cannot finish the takedown. It seems that he doesn’t have the power in his lead leg to really drive through Scheffel and finish the takedown.

Cappelozza’s nose is leaking now as Scheffel has looked like a completely different fighter compared to his opening regular season bout.  Renan Ferreira watches intently as a Cappelozza win would eliminate him from playoff contention.

With a minute left Cappelozza may have to sell out here but he’s not showing much urgency, continuing to jab the body but not throwing anything that threatens to finish the fight.

The bout comes to an end and Scheffel is confident he’s walking away the victor as we go to the judges scorecards, what a performance!