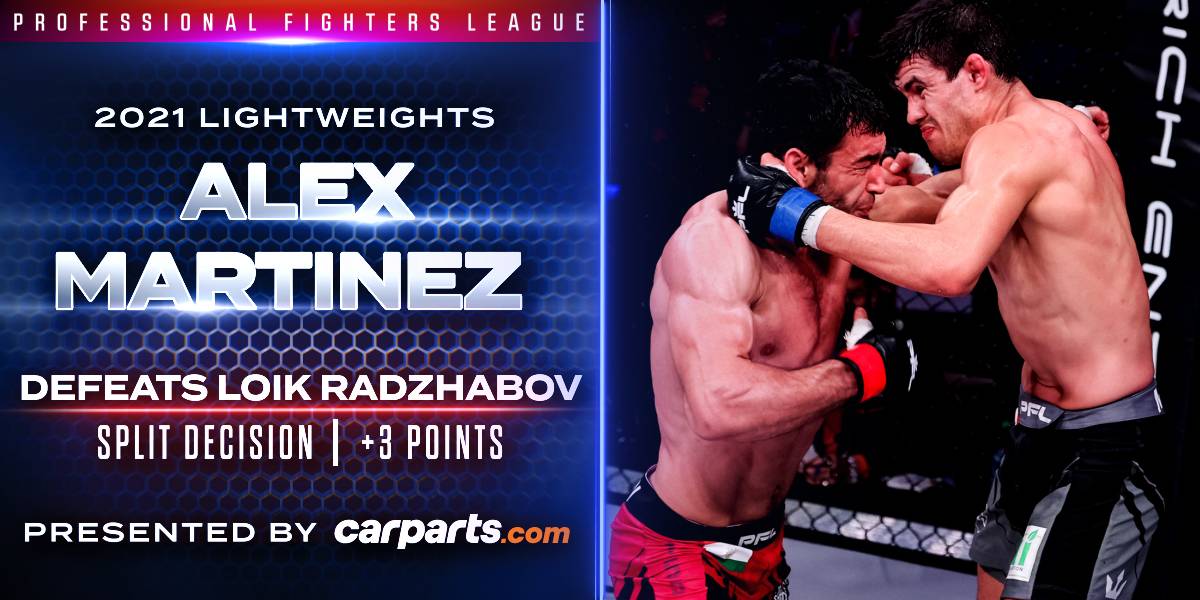 Tajikistan’s Loik Radzhabov (13-3-1) may have been the biggest surprise of the last PFL season, earning a spot in the finals as a No. 7 seed and going the distance with eventual lightweight winner Natan Schulte. Radzhabov opened the 2021 season by welcoming the league’s first Paraguayan fighter, Alex Martinez (8-0, 1 NC) to the PFL Decagon.

The fight began with an accidental strike below the belt and was paused for a moment. When the action resumed, Radzhabov quickly powered Martinez to the mat. Martinez wrapped his arms around the neck of Radzhabov, but the Tajikistan fighter passed to side control to evade the submission attempt. Martinez showcased an active guard, preventing Radzhabov from mounting offense from the top position. Martinez worked his way back to the feet, but Radzhabov used an outside trip to bring the fight back to the ground. Martinez scrambled well and gained top position with a single-leg takedown. He passed to mount, but Radzhabov was able to escape. Another choke attempt from Martinez was defended by Radzhabov along the fence. The pair exchanged range-finding kicks to close out the frame.

Martinez opened round two with an onslaught of kicks from distance. Radzhabov closed the distance and threatened with a ninja choke. Martinez was able to defend, but found himself on the bottom once more. Radzhabov allowed Martinez to stand and the pair clinched. Martinez applied an arm-in guillotine choke, but Radzhabov exhibited his cage savviness to escape. He dumped Martinez to the mat, but did not follow him to the canvas. Radzhabov picked his shots from the top as Martinez frequently attacked with submission attempts. A late triangle attempt from Martinez was brushed aside by Radzhabov as the round came to an end.

The fight’s final stanza began with a heavy exchange on the feet. Martinez continued to deliver kicks, but Radzhabov powered into the clinch and ended up on top of Martinez. Another choke from the bottom was defended by Radzhabov as he passed to half guard. The Paraguayan attacked with a kimura on the right arm of Radzhabov, but he was unable to finish. Radzhabov maintained control from the half guard, dropping short punches to the head of Martinez. When Radzhabov moved to the back of Martinez, it opened the door for Martinez to escape and slap on yet another guillotine attempt that failed. The final 30 seconds of the fight saw Martinez score on the feet, but Radzhabov responded with a big slam just before the final bell.

When the scorecards were read, it was the betting underdog Martinez who took home a split-decision victory and three points in the lightweight standings.