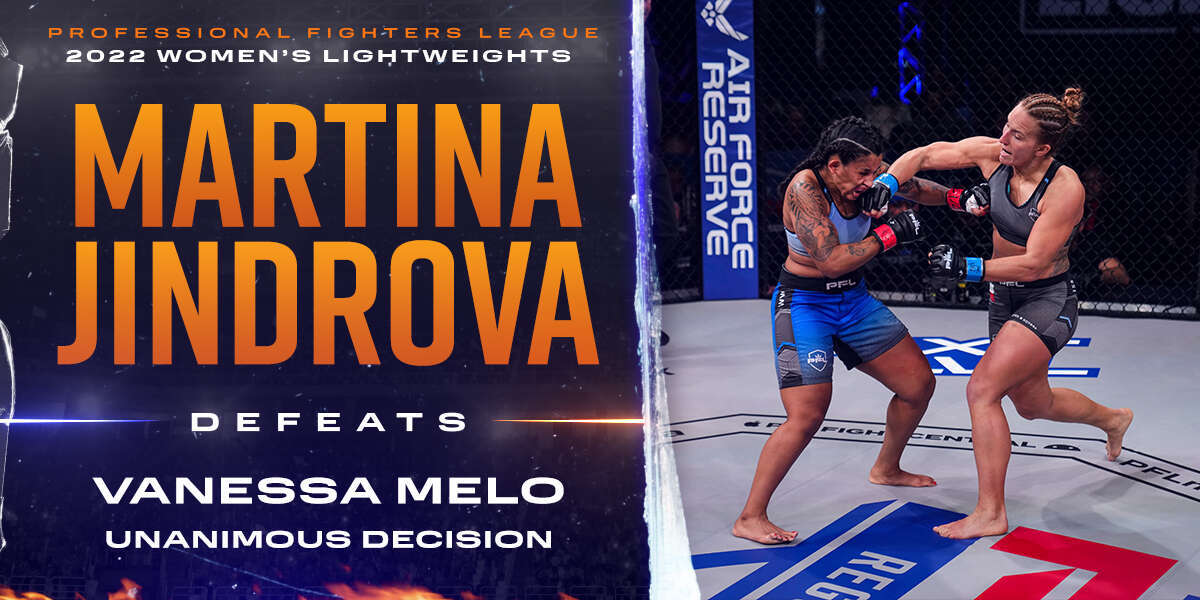 Martina Jindrova puts on a striking clinic in her PFL debut

Melo makes her PFL debut after being cut by the UFC despite winning her last fight and holds a significant experience advantage in this one, tied with Julia Budd and Larissa Pacheco for most pro fights in the women’s lightweight division (20).

An accomplished striker, Jindrova comes into this fight as a 2018 World Karate Federation European champion and a 2-time European kickboxing champion.

Well credentialed in Muay Thai and kickboxing, this bout promises fireworks to kick off PFL3!

Melo takes the center of the cage instantly, and the size difference is apparent early.  Jindrova throws out a front kick that lands. She would be wise to fight this fight at kicking range and stay out of the pocket where Melo can do damage.

Melo is advancing and throwing that lead hook, but she’s just a little too far out and can’t land as Jindrova is doing a great job with her footwork and getting in and out very quickly.

More of the same through 2 minutes, Jindrova doing a great job working little kicks and her job and getting in and out of the pocket before Melo is able to react and land.

Melo is still coming forward, but she may need to initiate the clinch or get this fight up against the cage to get any real damage off.

Jindrova lands a BIG 3-punch combo halfway through the round that appears to rock Melo a bit, but she recovers and continues moving forward.  Jindrova is getting off more and better offense so far fighting behind her jab and low kicks.

Melo finally is able to counter the leg kick with a big straight, but Jindrova seems unfazed and just keeps up her offensive output and pressure.  Melo may have caught her with a short hook in the last 10 seconds but Jindrova seems in great shape heading back to the corner after nearly tripling Melo in output and strikes landed.

Melo again opens the round in the southpaw stance and her left leg and movement appear slightly compromised.  Melo is still coming forward but catches a big right cross from Jindrova.  Jindrova is doing a fantastic job making Melo fight her fight and picking her apart from range.

90 seconds into the round Melo changes levels and shoots for the first time.  She doesn’t get the fight to the mat but is able to initiate the clinch and press Jindrova against the cage, where one would assume Melo might be able to have some more success as she has struggled to find the range.

Melo drops levels in the clinch and attacks a single leg but Jindrova is able to dig an underhook and perfectly defend, eventually breaking the clinch and getting back into space.

While Melo is definitely having more success in this round, she is still having a very difficult time closing distance and landing those overhands and hooks she is partial to.

Jindrova is constantly landing her jab and low kick and while she hasn’t landed a ton of power outside the big flurry in the first, the damage is definitely starting to add up.  Melo is able to dart in and land a right with about 20 seconds left and as the 10 second clapper hits, Melo draws Jindrova into an exchange in the pocket and connects with a big right.  Jindrova answers with a hook of her own and the round ends.

Definitely a better round for Melo, but Jindrova is dictating the pace and range, and her kickboxing acumen is certainly on display.

Melo again begins the round moving forward and walks directly into a right hand from Jindrova that stops her in her tracks.

Jindrova is still throwing naked low kicks and Melo appears to be finally getting the timing down, countering with an overhand that connects but doesn’t seem to do much damage.

Melo tries to close distance and again eats a jab on the way in that thwarts whatever plan she may have had.  Jindrova is getting drawn into fighting in the pocket as the fight goes on and needs to respect Melo’s power.

The fighters are back in the middle of the Smartcage and Jindrova again tees off with a big straight right.  So far Jindrova has landed 83/129 strikes for a fantastic 65% land rate.

Melo is nothing if not tough, constantly moving forward into the fire even when she’s getting hit.  Melo is going to need a finish at this point but she is still having trouble putting offense together.

Even while moving backward, Jindrova is effective with her straight punches and low kicks.

With 30 seconds remaining, Melo again initiates the clinch but she’s going to need some more urgency if she wants to win this fight.

They exchange short punches in the clinch but neither fighter does much damage.

Martina Jindrova takes home the first W of the night and 3 points in the Women's Lightweight standings!#2022PFL3 LIVE on ESPN+
🌎 https://t.co/jPNvomkWj8 pic.twitter.com/iS4QySBOzK

A true striking display by Jindrova who will comfortably win a decision and begin her PFL career with 3 points and temporarily take the #1 seed in the women’s lightweight standings.