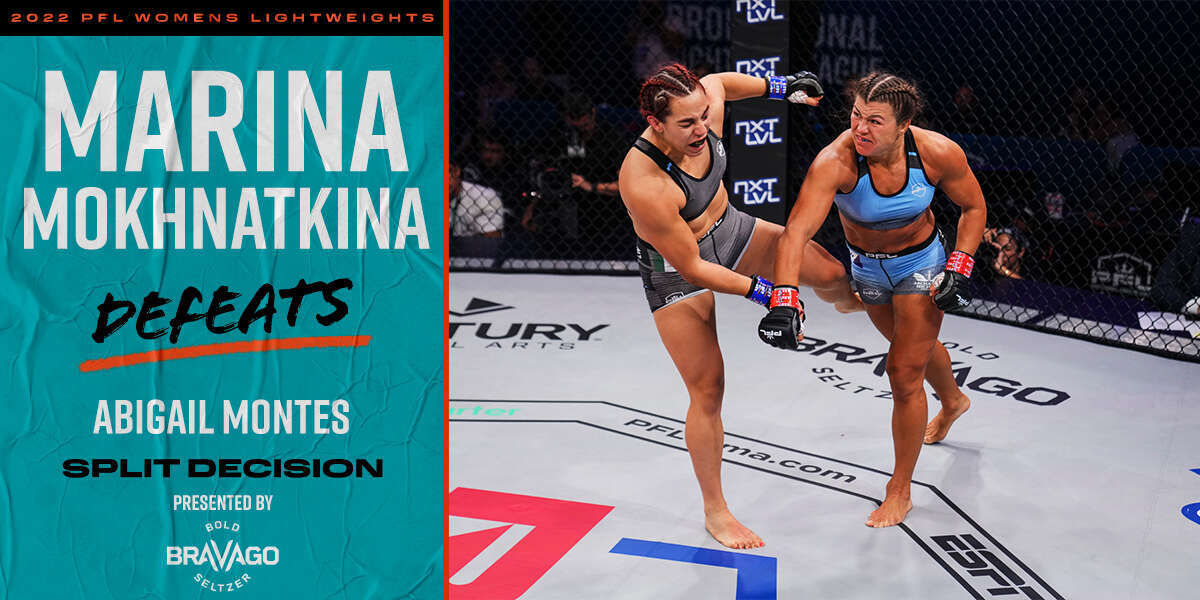 Our first true elimination bout of the night will see Marina Mokhnatkina (6-3) taking on Abigail Montes (3-1).  With both women coming off losses in their opening bouts of the season, it’s win or go home for these 2 warriors!

Despite losing her opening bout of the season to reigning 2x PFL Lightweight Champion, Mokhnatkina, a 7x sambo world champion, became just the 2nd fighter to take Kayla Harrison to a decision, joining perennial PFL contender Larissa Pacheho. 4 of Mokhnatkina’s 6 career wins have come by way of submission, and she will likely need a finish tonight to make the Playoffs.

Arriving to the PFL in style, Montes first competed for the promotion last year in a showcase bout against The GWOAT Claressa Shields. Montes went on to win that bout by split decision, handing Shields her first ever combat sports loss and earning herself a spot in this year’s PFL Regular Season.  After dropping a split decision to Olena Kolesnyk to open her 2022 campaign, Montes too will likely need a finish if she wishes to make the Playoffs and compete for a PFL World Championship and 1 million dollars.

The fighters touch gloves and we’re underway as both women attempt to establish control of the center of the SmartCage, exchanging flurries of straight punches.

Montes lands a naked leg kick but eats a counter right in the process as the fighters feel each other out and find the range. Mokhnatkina is landing big early with 2 right hands before she initiates the clinch. Montes is able to pummel for an underhook and circle off the cage, disengaging and retreating to the center of the SmartCage.

The fighters jockey for position along the fence as Montes is again able to reverse position, circle off, and disengage from the savvy sambo fighter.  They return to the center of the SmartCage with a minute remaining as Montes lands a big left, her best strike of the fight so far.

As the round winds down, Montes appears to be picking up some momentum, landing a pair of big left hands before Mokhnatkina again lands that straight right.

The round comes to an end and with that, Olena Kolesnyk clinches a Playoff spot!

This time, Mokhnatkina takes the center of the SmartCage off the bat and she’s hunting that big right hand once again.  Montes throws a kick that Mokhnatkina is able to catch and use to clinch once again.

Mokhnatkina has been able to initiate the clinch well, but she has yet to get the fight to the mat as Montes once again perfectly defends before disengaging.

Montes now attempts a high kick and a body kick but can’t connect with either as she continues to have trouble finding the range.  Montes is loading up on that right hand but has yet to connect clean with it.

Just like that, Montes lands a nice spinning backfist as she continues to gain some momentum here.  Mokhnatkina seems to be slowing down a bit here halfway through the 2nd round.

Both fighters miss on big punches before Montes lands a big right over the top right on the chin! Montes is clearly the fresher fighter at this point with 90 seconds to go in the round.

As the round winds down, Mokhnatkina beautifully ducks under a right hand and is able to drive through a single leg takedown, finally getting the fight to the mat by kicking out the outside leg.  She wastes no time working to improve position, taking Montes’ back in the scramble and sinking in an RNC/neck crank.

Montes is able to survive the late offense and we’ll head to the 3rd round.

Once again both fighters rush to the center of the SmartCage and look to establish themselves.  Montes is still clearly the fresher fighter and Mokhnatkina will need to be careful here.

Montes lands a short flurry before Mokhnatkina lands that same right hand she has had success with all night.  Montes overthrows a right hand and Mokhnatkina again changes levels and attacks the double leg, but this time Montes is able to fight it off and get back to her feet instantly.

Mokhnatkina looks to clinch again and takes a big knee from Montes on the break as the fighters reset once again. Montes seems to be sensing the urgency, coming forward and throwing big punches before Mokhnatkina again changes levels, searching for a double leg and being denied once again by Montes.

The pace now appears to be catching up to Montes as she sprawls and lands a nice right hand with a body roundhouse behind it. Montes has now officially outlanded Mokhnatkina as we hit 1 minute remaining in the bout.

Montes is now leading the dance, coming forward and landing but both women are exhausted.  The 10 second clapper hits and they are content to swing to the very end with both women landing some big shots in the exchange.

Marina Mokhnatkina gets the split decision win with 30-27s on both sides!