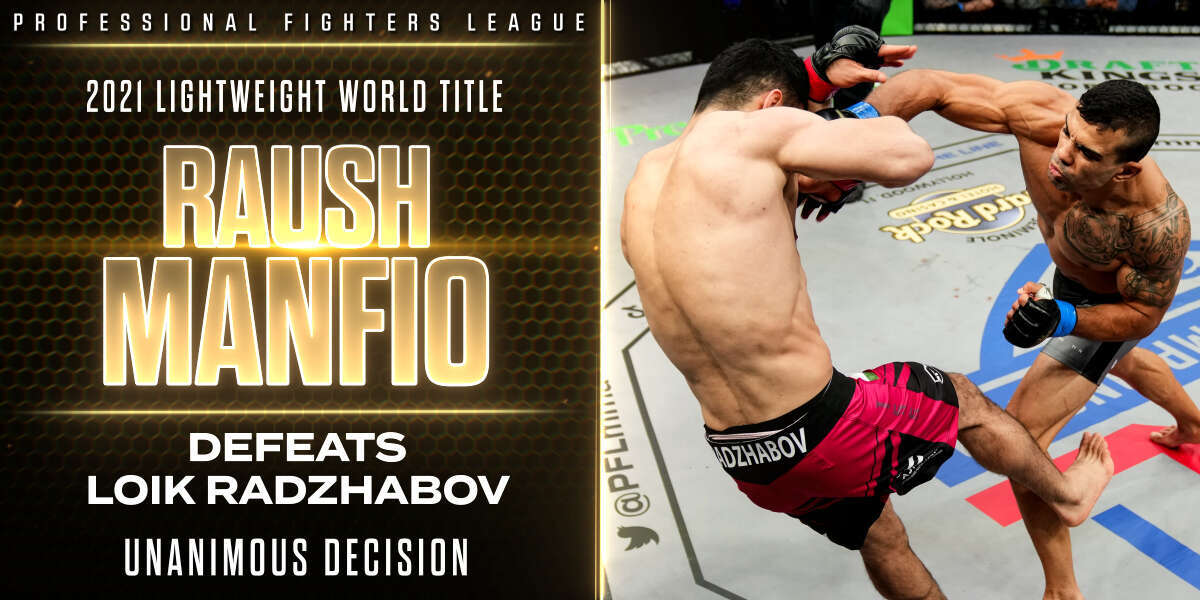 Manfio Completes Cinderella Run, Wins It All vs. Radzhabov

Loik Radzhabov and Raush Manfio took the cage Wednesday evening at the 2021 PFL World Championship for a shot at $1 million and the PFL Lightweight world title.

Would Manfio finish his unlikely Cinderella run to the top in a blaze of glory?

Here’s how it went down inside the Seminole Hard Rock Hotel & Casino in Hollywood, Fla.:

Radzhabov throws a naked leg kick, and Manfio makes him pay with a heavy one-two early. Radzhabov, undeterred, gets right back to it, pressuring Manfio and working his hands.

Manfio, however, looks laser-focused here, and he lands a massive right hand that gets Radzhabov’s attention. Another one, and Radzhabov initiates the clinch. Manfio shrugs him away, and they’re back to striking range.

These two are settling in now, picking their shots and looking just a bit more cautious than they did in the opening two minutes. Manfio steps in with a three-piece combo that largely misses. Radzhabov returns fire with some heavy shots, backing Manfio against the cage, where they clinch.

They separate, and it’s back to trading. Manfio pressures forward, but Radzhabov lands and takes the center of the cage, turning the tables and becoming the aggressor. A leaping left hook lands for Radzhabov, but Manfio returns with a strong leg kick that pushes Radzhabov off-balance.

High kick just misses for Manfio, and they are slinging heavy leather here, each fighter landing solid shots. The round ends there.

That’s how you kick off the title-fight action, ladies and gentlemen. What a round.

Awesome 1st round! How did you score it at home?#PFLChampionship LIVE NOW
🇺🇸 ESPN+
🌍 https://t.co/WfOt9XBfzk pic.twitter.com/dbJ6wGIXMw

One-two lands for Manfio, but Radzhabov fires back with a strong left hook. They’re right back after it in full, Manfio landing a strong knee but Radzhabov powering forward without a care. Another left hook lands for Radzhabov.

Straight right down the pipe lands for Radzhabov, and he presses Manfio against the cage, looking to drag him to the mat. Nothing there, and they’re swinging again.

This fight is wild, friends. It’s hard to imagine they can keep this pace for five rounds, but neither man has been seriously hurt, and they appear content to trade leather until somebody falls.

Radzhabov is out quickly in Round 3, pressing Manfio backward. They clinch briefly, and Manfio lands a few shots inside before separating. Another right hand lands for Manfio. Left to the body finds its mark for Radzhabov, and he’s pressing forward with ill intent here.

Big right hand lands for him, but Manfio counters with a little check knee. Amazingly, neither fighter is slowing in this round.

Two minutes to go in the round, and Radzhabov clinches briefly, pressing Manfio against the cage. They separate, and Radzhabov beautifully closes the distance and secures a quick takedown. What a sequence from him.

Just as it looks like Radzhabov is going to settle in, Manfio pops right back to his feet. They clinch against the cage once again, with Manfio landing some solid knees.

Nice foot sweep from Radzhabov closes things out here, and we’re onto the championship rounds.

Massive exchange of hooks kicks off Round 4, and Radzhabov is in on a double. He dumps Manfio to the mat, but that’s short-lived. They’re back on the feet landing bombs. This is absolute madness.

Manfio is flat-out pouring it on, and Radzhabov appears to be fading quickly. He circles away again, hands down, and leans against the cage. Manfio clinches and fires away with a series of knees. He senses the end, and he’s pursuing it with a fury.

Radzhabov, however, is still here. He lands a left hook as Manfio regroups. A massive right body kick lands from Manfio, followed by a foot sweep. Radzhabov is offering little in return as Round 4 stretches on, but Manfio hasn’t been able to put him away. Big-time heart and determination shown from both men here.

Another foot sweep from Manfio, and Radzhabov is just hanging on, hoping to see the fifth round at this point. He survives. We’re onto the fifth round, and all the momentum favors Manfio. Will he get it done?

Radzhabov comes out quickly, taking the center of the cage, but misses with a right hand. He looks much fresher here, backing Manfio against the cage and continuing to fire away with strong shots.

Radzhabov is landing here, scoring with back-to-back hooks, and Manfio is on his heels. Inside trip from Manfio puts Radzhabov on the mat, but he immediately bounces back to his feet.

This is madness. Radzhabov slings another series of punches, getting Manfio’s attention, before eating a huge right.

With a massive prize on the line, both fighters showed up in the biggest way, bringing the crowd to its feet.

In the end, one man had to win the PFL world title and the $1 million prize, and all three judges agreed with the night’s decision.

The No. 3 seed Manfio got it done, taking the fight unanimously and earning a life-changing moment inside the SmartCage.

“This is a dream come true,” Manfio told Sean O’Connell after the fight. “...Hey, Natan [Schulte], now I have a belt like you, my brother.”