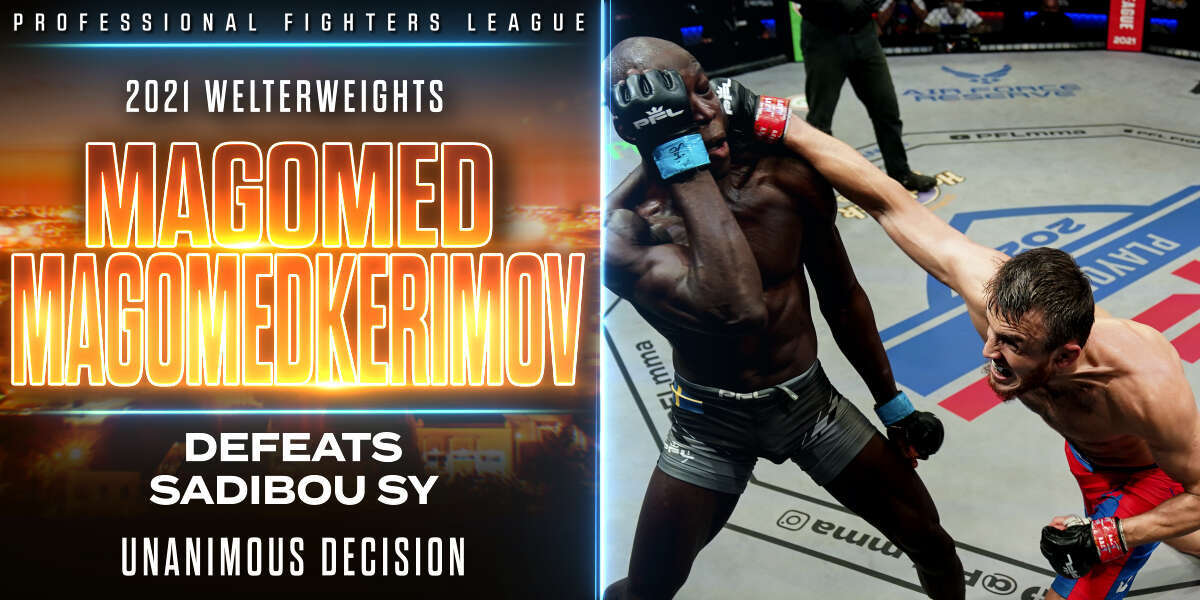 Magomedkerimov, the No. 4 seed, entered the fight off a first-round Ezekiel choke finish of Curtis Millender, while Sy most recently earned a unanimous decision nod over Aleksei Kunchenko.

Which welterweight earned the victory to advance to the PFL World Championship?

Magomedkerimov rushes quickly to initiate a clinch, but Sy escapes and circles … momentarily. The Dagestani fighter is right back on Sy, and this time he completes the takedown, planting his foe on the mat and going to work from top position.

From the top, Magomedkerimov searches for the Ezekiel choke, but it’s not there. He returns to Sy’s full guard, where he’s working with strikes from the top. Sy maintains decent control here, avoiding major punishment and tying up Magomedkerimov. Another Ezekiel choke attempt –– this time much closer –– but Sy again escapes and survives.

Magomedkerimov executes a nice leg drag and passes to side control, finishing the round on top.

They come out swinging for Round 2, with Magomedkerimov landing a big right hand only to be countered by Sy. That caught his attention, no doubt. Now Sy gets to work with leg kicks, attempting to inhibit the movement of Magomedkerimov.

Three and a half minutes to go, and Magomedkerimov attempts a takedown, but Sy shuts it down with a nice sprawl. He’s out, returning to the feet and again landing a nice series of low kicks. Magomedkerimov presses forward with strikes, but they don’t land, and Sy steps away, circles, and recalibrates.

One minute to go, and Magomedkerimov gets the takedown. He’s on top, powering away with punches until the bell sounds.

Sy likely needs a finish here, and he clips Magomedkerimov early with a short punch inside. They circle, with Magomedkerimov pressuring but Sy countering nicely with leg kicks and punches to keep his opponent at range.

It appeared to be Magomedkerimov’s fight –– a sentiment supported by the PFL broadcast team and the fight stats –– but did the judges get this one right?

Magomedkerimov remains undefeated at 10-0 inside the PFL smart cage, and he advances to the PFL Welterweight Finals to face the winner of the night’s main event between Rory MacDonald and Ray Cooper III.