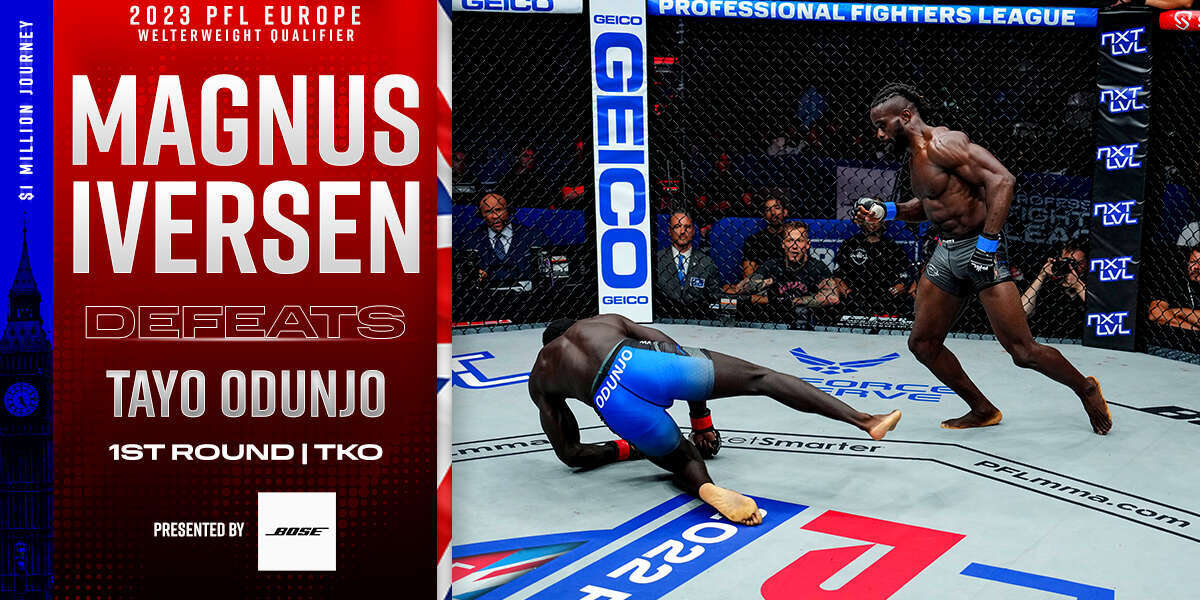 The PFL Europe Qualifiers roll on as Tayo Odunjo (4-1) steps into the SmartCage with Magnus Iversen (2-0) in a Welterweight bout.  A former boxer, Odunjo has deceptive power and lightning quick hands.  Iversen meanwhile got his start in Muay Thai after needing an outlet to use anger from a rough upbringing in a positive way.  Only one of these men will walk away with a spot on the 2023 PFL Europe Roster!

The fight begins and both men look to take the center as they trade jabs and low kicks to feel each other out.  Iversen appears to be establishing control of the center as he beautifully dips under a right hand from Odunjo to secure a takedown despite a bad cage grab from Odunjo.

Iversen is now in top half guard and he appears to be attacking an arm triangle.  It’s early but Odunjo doesn’t even appear to be attempting to work back to his feet yet as he finally attempts a sweep but is quickly smothered by Iversen.

Iversen now passes to mount but only for a second as Odunjo is able to regain half guard. Iversen is now landing some short punches to the body but Odunjo is able to explode and get back to full guard, though he chooses to close the guard right away rather than continuing to work for better position.

Odunjo briefly threatens a triangle and can’t lock it up but it creates space for him to get back to his feet.  Iversen is coming forward behind some heavy hooks but Odunjo loks very comfortable in there with his hands at his waist.

OH MY! Perhaps Odunjo was a little too comfortable as Iversen lands a massive overhand right and flatlines Odunjo!

Magnus Iversen improves to 3-0 and secures a spot on the 2023 PFL Europe Series with a monstrous KO!