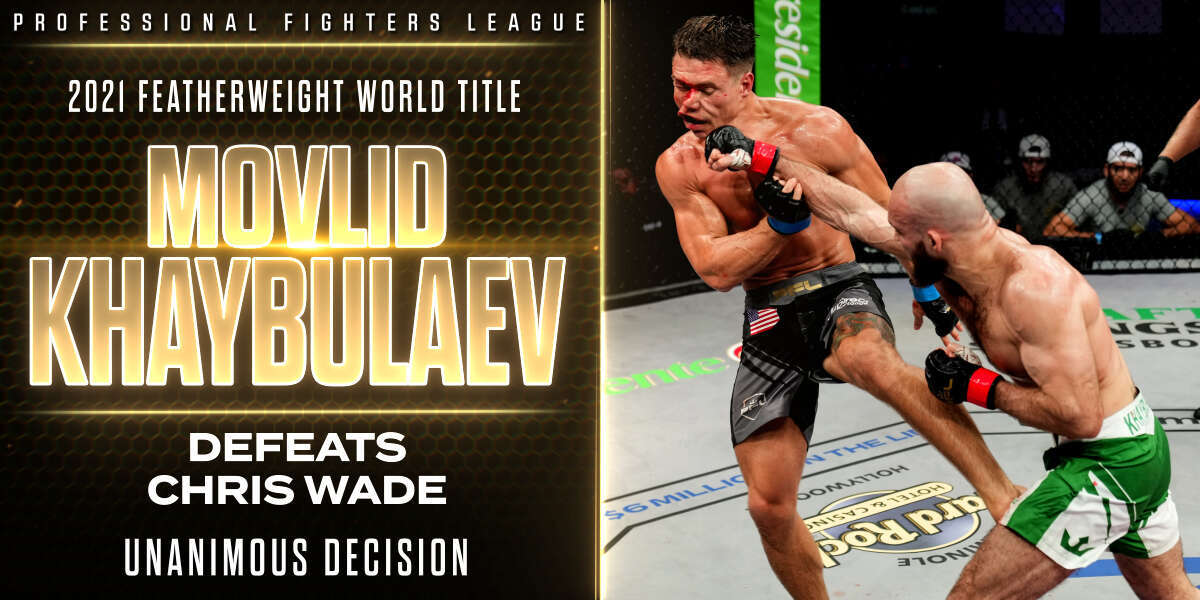 Movlid Khaybulaev and Chris Wade had big shoes to fill as they kicked off the 2021 PFL World Championship main card on ESPN2 and ESPN+ Wednesday evening.

As the third title fight of the evening, Khaybulaev and Wade had to follow a Fight of the Year contender from lightweights Raush Manfio and Loik Radzhabov and a first-round finish from Antonio Carlos Jr. against Marthin Hamlet.

That put these top featherweights in a must-deliver situation for the crowd inside the Seminole Hard Rock Hotel & Casino in Hollywood, Fla.

Could they keep the fireworks show rolling?

We’re off, and the feeling-out process begins. Wade takes the center of the cage, but Khaybulaev keeps him honest with some power punches over the top.

Wade keeping the distance early well, but Khaybulaev closes the gap and lands a powerful left. Wade eats it and continues to feint and chip away with a series of kicks. Khaybulaev connects with a right hand behind the ear that momentarily staggers Wade, but the Long Islander is able to regroup.

Now, Khaybulaev presses wade against the cage, and they clinch. They separate, but Khaybulaev is back at it, landing a hard right hand straight into a takedown. He holds Wade for just a moment before they pop back to their feet.

It’s Khaybulaev’s round early, but Wade appears fresh and composed despite the early adversity. Khaybulaev gets another takedown and this time take’s Wade’s back near the cage. Wade senses Khaybulaev riding a bit high and nearly escapes before an adjustment is made.

The round ends with Khaybulaev on Wade’s back.

Wade takes the center immediately and lands a body kick, followed by a kick upstairs. Khaybulaev doesn’t mind, and he’s back to winging powerful punches at Wade’s dome. Another clinch, and Khaybulaev presses Wade against the cage.

They separate and get back to work in the center of the cage with 3:30 left in the round. Another strong right lands from Khaybulaev. And another. Wade stands strong and fires back, but Khaybulaev continues to win the majority of these exchanges.

Khaybulaev clinches against the cage once again. They trade knees on the inside before separating, where Khaybulaev immediately lands another right hand before tossing Wade to the mat.

Khaybulaev ends the round once again trying to take Wade’s back.

Khaybulaev fires out of the gates and lands a nice jab followed by a leg kick. Wade eats both and looks to establish his own offense. No go, as Khaybulaev rushes in with a series of punches and secures another takedown from the body lock.

Wade is game though, and he pops back to his feet, using the cage for some support along the way. They continue to clinch, with little happening from this position.

With 1:39 left in the round, referee Gary Copeland separates them. Big right hand lands from Khaybulaev, but Wade once again eats it without issue. Now, Khaybulaev powers forward and secures another body lock against the cage.

Wade avoids the takedown, but it’s all countering and defense from him with less than 30 seconds to go in Round 3.

Stop us if you’ve heard this before: Khaybulaev ends the round on Wade’s back. Wild.

Championship rounds, and Wade likely needs a finish here if he wants to leave with the belt and the fat check.

And it’s not a great start for him on that front, as Khaybulaev uses his punches to set up another takedown. Wade looks for a guillotine, but it’s not there, and Khaybulaev escapes and winds up in half guard.

Methodically, Khaybulaev works to the back, but Wade escapes beautifully –– only to be taken down again by Khaybulaev. This truly looks like a Khabib Nurmagomedov-type performance from Khaybulaev, which should come as no surprise.

Still, Wade has looked phenomenal throughout the 2021 PFL Regular Season and Playoffs, but Khaybulaev is ripping through him right now with little issue.

Another scramble ensues, and Wade appears to reverse position, but Khaybulaev plants him right back on the mat. Just stifling stuff here from the Dagestani fighter, and we’re off to Round 5.

Wade opens up with a jumping knee, but Khaybulaev counters it, and they’re pressed back against the cage. In no time, Khaybulaev drags things to the mat. Wade’s back up, but Khaybulaev’s relentless, looking to take his foe right back to the canvas.

A few knee strikes land from Khaybulaev, and they’re back to the mat. Wade searches for an armlock on the way down, but it’s not there. Kudos to Wade for repeatedly battling out of terrible positions and working his offense at any opportunity, but Khaybulaev is just too much thus far.

One minute to go, and Wade’s looking for a kneebar, but Khaybulaev appears unconcerned. Hilariously, Wade trades punches from Khaybulaev’s toes and head, looking for any Hail Mary he can get as this fight comes to an end.

Khaybulaev doesn’t care, and he holds on until the final bell. This is going to the judges, but everyone knows what’s coming.

The PFL Featherweight Title is headed to Dagestan. Khaybulaev’s grappling and pressure was just too much for Wade, and the three judges cageside saw the fight unanimously.

In an emotional moment, Khaybulaev dedicated the win to Abdulmanap Nurmagomedov, the late father of Khabib Nurmagomedov, who served as Khaybulaev’s primary trainer, coach, and good friend.