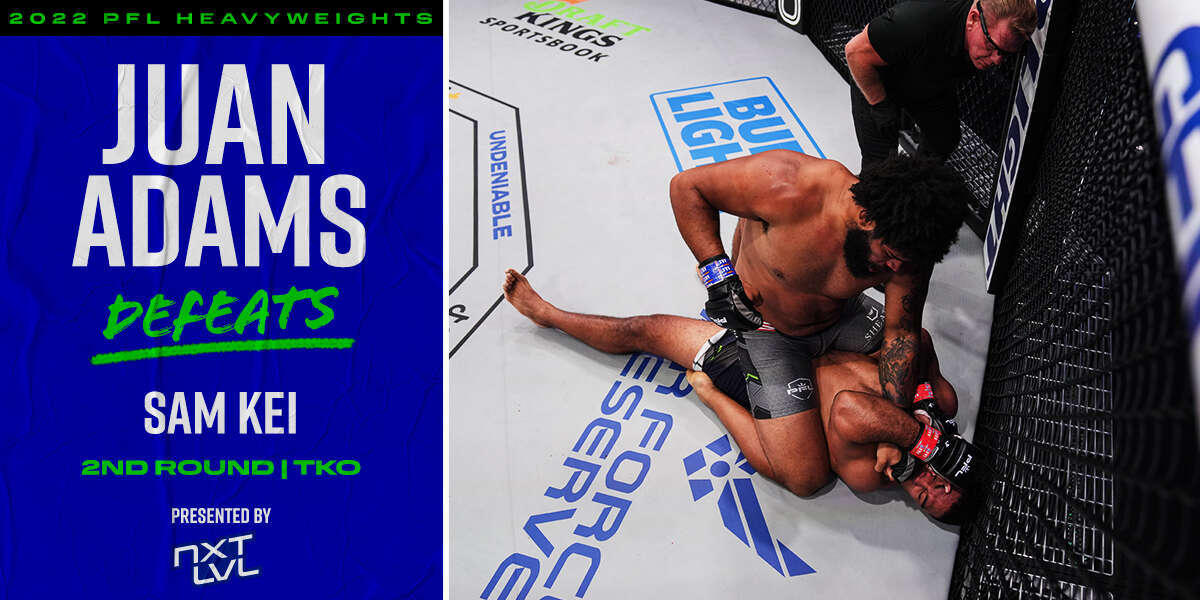 Our first Heavyweight bout of the night features UFC veteran and PFL newcomer Juan Adams (9-4) making his return to a major promotion after racking up 4 wins and 1 loss including a Heavyweight title in Fury FC.  Across the SmartCage will be another PFL debutant in Sam Kei (8-5) who rides a 2 fight win streak into his promotional debut.  While it will be tough for either fighter to make the playoffs in such a competitive Heavyweight field, an early Quick 6 and some help could still conceivably see either fighter competing in the PFL Playoffs for a World Championship and accompanying 1 million dollars.

A prolific finisher, Adams has a 100% career finish rate with all 9 of his wins coming before the final bell and 7 of those finishes coming in the 1st round. After a tough run in the UFC, Adams believes he has made the changes to his training, physique, and technique to become a mainstay in the PFL Heavyweight division.  Notably, Adams is also a freak athlete, having earned tryouts with the Green Bay Packers and Indianapolis Colts as a defensive lineman after college. This is NOT your average Heavyweight folks.

Kei on the other hand has held gold in 2 different regional promotions, HEX and Nitro MMA, at both Heavyweight and Light Heavyweight. This will not only be his promotional debut but also his first time fighting in the United States. Despite a nearly 5 year break from professional MMA competition, Kei stayed busy competing on the amateur boxing circuit and representing his home nation of Tonga in the 2018 Commonwealth Games.

Our first Heavyweight bout of the evening is underway and Juan Adams lands BIG early, wobbling Kei briefly before changing levels, grinding in the clinch, and eventually taking the back and slamming Kei to the mat.

Kei works back to his feet only to once again be ragdolled to the mat.  Adams is leaning all of his weight on Kei as Kei attempts to establish his base and work back to his feet again.  Adams throws some knees to the thigh of Kei as the referee warns Kei not to grab the cage.

Notably, both men need a first round finish to keep their playoff hopes alive so one would assume Adams will sell out for a finish with this dominant position as he picks the ankle and gets Kei down again.  Smartly, Adams is using his grappling to negate Kei’s boxing advantage.

Adams is staying heavy on top but has yet to really sell out as Kei is able escape and land a big combination! The momentum seems to have turned on a dime as Kei is now teeing off on Adams, landing big punch after big punch.

Adams has taken some punishment here but somehow he’s hanging around as Adams now comes forward, landing some light strikes before changing levels again. With 30 seconds remaining in the round the fighters clinch and both throw short strikes before breaking.  Kei lands a massive liver shot as the round ends that draws a big reaction from Adams, what a round!

Both fighters are officially eliminated from playoff contention as the round ends.

Round 2 begins and Kei lands another big overhand right as Adams just continues moving forward and pressuring.  Kei goes back to the body shot he found success with to end the 1st round and Adams seems to be moving a bit more slowly than at the start of the fight.

And as I say that, Adams lands a big right of his own! Adams is now teeing off on Kei who can’t get his back off the SmartCage and again Kei fires a big right over the top and clips Adams! We’ve got a back and forth brawl on our hands.

Adams again gets the fight to the ground and gets to the mount, raining down punches on Kei who is still intelligently defending and working to better his position.

Though the shots didn’t look that big, after all the cumulative damage the ref decides he’s seen enough and Juan Adams wins by TKO!

Juan Adams makes a successful PFL debut and although he won’t make the playoffs, he earns 5 points with a Fast Five.