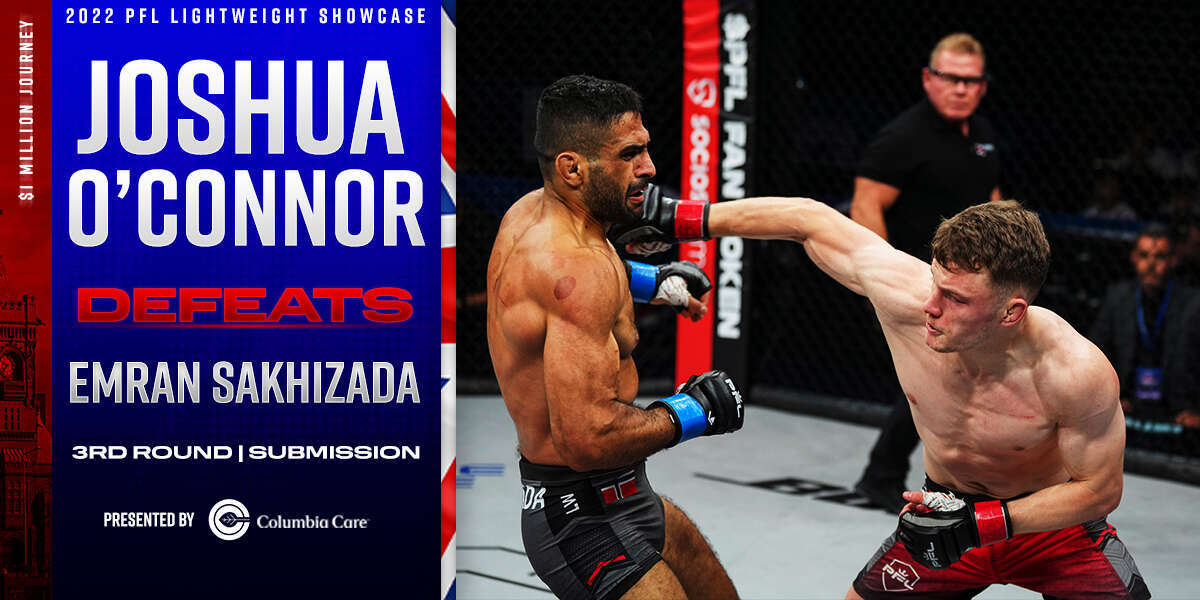 A hometown favorite in Cardiff, the Welshman Joshua O’Connor (1-0) looks to build on a successful professional debut against Emran Sakhizada (2-1). While this is only his 2nd professional MMA bout, O’Connor is a 2x British Judo Champion and a 2016 Commonwealth Games Champion. Sakhizada returns to the cage after a three year hiatus due to injury, though he has also taken layoffs

Sakhizada takes the center of the SmartCage early and fires a low kick and the crowd is already getting loud for O’Connor.  O’Connor fires a roundhouse kick which Sakhizada catches and uses to take him down but he can’t do anything with it, as O’Connor pops back up and goes to work in the clinch.

This time, it’s O’Connor with the takedown but the same result as Sakhizada pops right back up and attempts a beautiful hip toss but O’Connor is able to roll with him and scramble right back up.

Sakhizada attempts a sacrifice throw and quickly learns why it’s such a dangerous technique as he winds up on bottom with O’Connor working to secure control of the back and get his hook in.

In another gorgeous scramble, Sakhizada uses the gramby roll to get out of danger and briefly wind up on top before the fighters return to their feet and break.

Sakhizada whiffs on a right hook and O’Connor makes him pay  instantly with a big left but Sakhizada is undeterred, coming forward and landing a nice 1-2 and just missing a big hook on the end of it as O’Connor winds up out of position for a counter.

The fighters return to range and both fire a pair of low kicks to gauge distance as O’Connor follows one up with a nice left hook.  Sakhizada swings big and misses and O’Connor latches on looking for the takedown but he won’t be able to secure it as the round comes to a close.

We’re off once again and Sakhizada seems content to fight behind some heavy leg kicks but after a few, O’Connor is able to time him up and land a counter left hook that makes Sakhizada reconsider.

Despite a grueling pace both men seem quite fresh, but Sakhizada continues to get a bit overzealous and out of control, leaving openings for O’Connor to counter as the fighters engage the clinch and O’Connor looks to grind Sakhizada out along the cage.

O’Connor secures the body lock takedown and unloads some big right hands on the ground before Sakhizada recovers and gets back to his feet.  This fight has been full of absolutely incredible scrambles so far as everytime a fighter seems to secure dominant position on the ground, the other is able to reverse.

Now, O’Connor secures a takedown and lands in Sakhizada’s closed guard, finally establishing some good control and top pressure as Sakhizada works to get the butterfly hooks in and create some space to explode back to his feet.

O’Connor however is staying heavy on top and again Sakhizada is able to roll out of back control but O’Connor uses the front headlock to transition to the back before Sakhizada once again explodes back to his feet.

Sakhizada appears to be slowing down as the 2nd round winds down and these heavy grappling exchanges and wild punches start to take their toll.

O’Connor looks to be fighting well beyond his age and experience level so far.

Round 3 begins with the crowd cheering on O’Connor as he takes a page from Sakhizada’s book and fires some heavy low kicks.  O’Connor very much appears to be the fresher fighter at this point.

Sakhizada shoots a takedown and O’Connor drops his level and defends perfectly as he keeps the pressure on, landing a nice 1-2 before driving through and finishing a double leg takedown of his own.

O’Connor has one hook in and is peppering short shots as Sakhizada attempts to work back to his feet.  O’Connor smells blood now as he attacks an RNC but quickly abandons it for heavy ground and pound before going right back to it, flattening out Sakhizada and applying the squeeze until he gets the tap and the Cardiff crowd explodes for the hometown fighter!

Joshua O’Connor shows a little bit of everything en route to a 3rd round finish to improve to 2-0 as a pro.