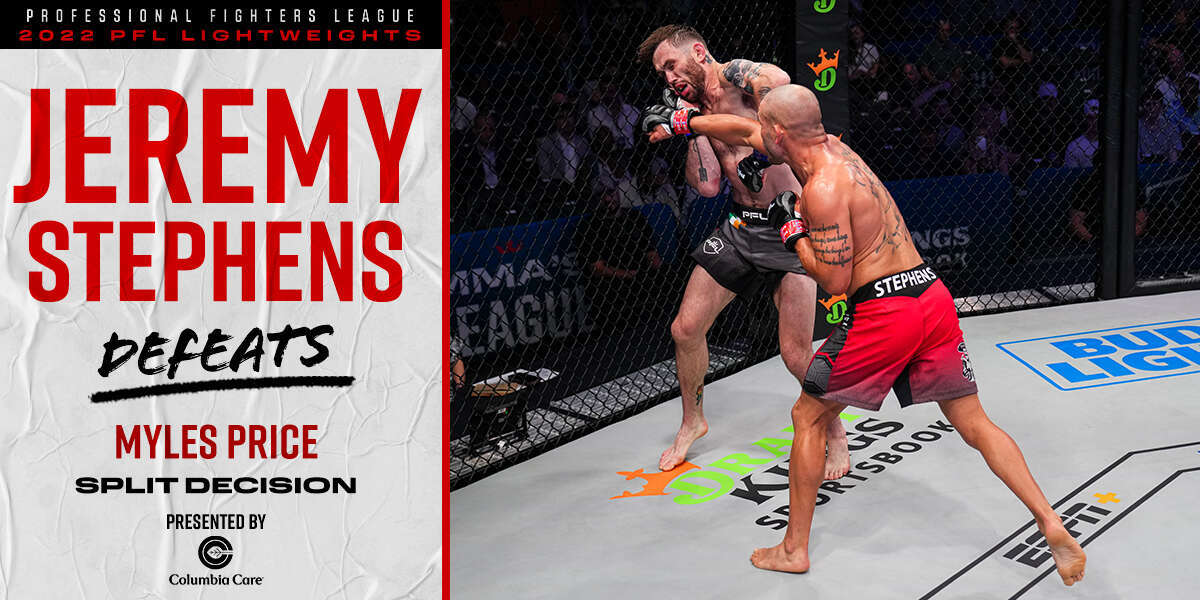 The ESPN Main Card kicks off with one of the most compelling bouts of the evening, “Lil’ Heathen” Jeremy Stephens (28-20) clashes with Myles Price (11-8) in yet another playoff eliminator.  Both men come into this fight following losses in their respective PFL debuts and both will need a fast finish to keep their 1 million dollar championship dream alive.

A legend in his own right, Stephens’ name is all over the UFC record book as he is in the top 10 all time in total fights, performance bonuses, and knockdowns with the promotion.  In his PFL debut, Stephens put on a fight of the year candidate against Clay Collard in a 15 minute brawl that all 3 judges saw for Collard.  Stephens motto after his debut was “no failing, just learning” and we shall see if he learned enough to right the ship and punch a ticket to the playoffs.

“Magic” Myles Price also came up short in his promotional debut, suffering a 1st round submission loss to Anthony Pettis.  A well-traveled and well credentialed fighter in his own right, Price has competed in Brave, Bellator, and the PFL. He has also trained with both Conor McGregor and Khabib Nurmagomedov over his career.  Chalking up his last performance as a “psychological issue”, Price will also be seeking to make some adjustments to his game and come away with a quick finish to keep his playoff hopes alive.

We’re underway as a very bald and smooth Stephens stalks Price early.  Price decides to shoot early and Stephens sprawls hard, scrambling into top position and half guard.  Price seems comfortable on the ground, re-guarding and getting the butterflies in before eventually deciding to stand back up.

Stephens is throwing a lot of varied offense early with low kicks, hooks, straights, and body kicks all mixed in.  Neither man has landed anything significant on the feet yet as Price employs the Floyd Mayweather Philly Shell to negate Stephens striking. Stephens is able to figure him out and land a big right before Price circles out and resets.

They exchange on the feet and clinch briefly before Stephens unloads a brutal combo of hooks to the body of Price, but Price also lands in the exchange.

With 90 seconds remaining, Stephens is digging an underhook against the SmartCage.

With just under a minute remaining, neither man can officially clinch a playoff spot in this bout as Price lands a big right hand of his own. Stephens appears to be slowing down a little as Price is picking up steam and starting to use his jab effectively.

Price finishes the round much stronger than he started it but is likely still a 10-9 for Stephens.

Round 2 begins with Price attacking a low kick and a body kick and Stephens firing a low kick right back at him.  Price may have caught Stephens below the belt but Stephens waves off the ref and elects to continue fighting.

Stephens is clinching once again and loading up on that right-hand over the top but Price is wise to it.  So far Price is doing a much better job fighting behind his jab and the live odds are starting to narrow a little bit.  Stephens pace has slowed a bit at this point but Price will need a bit more urgency and volume if he wants to win this fight.

It appears that grinding on Price in the clinch is a large part of Stephens game plan and he’s doing a fantastic job working his underhooks and fighting for position, though you’d like to see him do some more damage.

In a wild exchange, Price catches Stephens with an uppercut with a hook behind it and Stephens returns fire, landing a hook of his own.

The fighters exchange smaller strikes before Price again shoots but cannot finish the takedown.  Stephens is able to pummel for double underhooks and reverse position.  Price is having some success with knees in the clinch as Stephens peppers the body with short hooks and uppercuts.

With a minute remaining in the round, a strong flurry from either fighter could steal it as Stephens again clinches and drives Price into the SmartCage. They trade short blows with Price again going with the knees and Stephens again working those short body hooks and looking for the right hand over the top. The round ends in a familiar position as the fighters break and retreat to their respective corners.

Our final round is underway as Price again unsuccessfully shoots the takedown and winds up on the bottom.  Price closes the guard and begins trying to isolate an arm but Stephens senses the danger and disengages as they return to the feet.

Price appears to be the fresher fighter at this point but he may well need a finish to win at this point as Price attempts a hip toss but Stephens uses the whizzer to quickly get back to his feet and return to this familiar clinch position against the SmartCage.

Price reverses position, throws a hook, beautifully changes levels off of it, and finally gets the takedown, landing in top half guard with heavy top pressure and Stephens flat on his back.

Stephens is able to get the butterflies in briefly but cannot regain full guard as Price gets back to half guard and continues throwing small punches, trying to open up an opportunity to advance position or attack a submission.

The referee warns the fighters to work and Price turns up the output once again as he is now the live betting favorite despite coming in as a 6-1 underdog!  Price is doing a fantastic job with shoulder and head pressure to keep Stephens on his back.

Just as the 10-second clapper goes off, Stephens is able to get back to his fight and bullrush Price, though nothing really landed flush.

After a razor-close fight, Jeremy Stephens ekes out the split decision to move into 4th place (for now) in the PFL Lightweight standings!