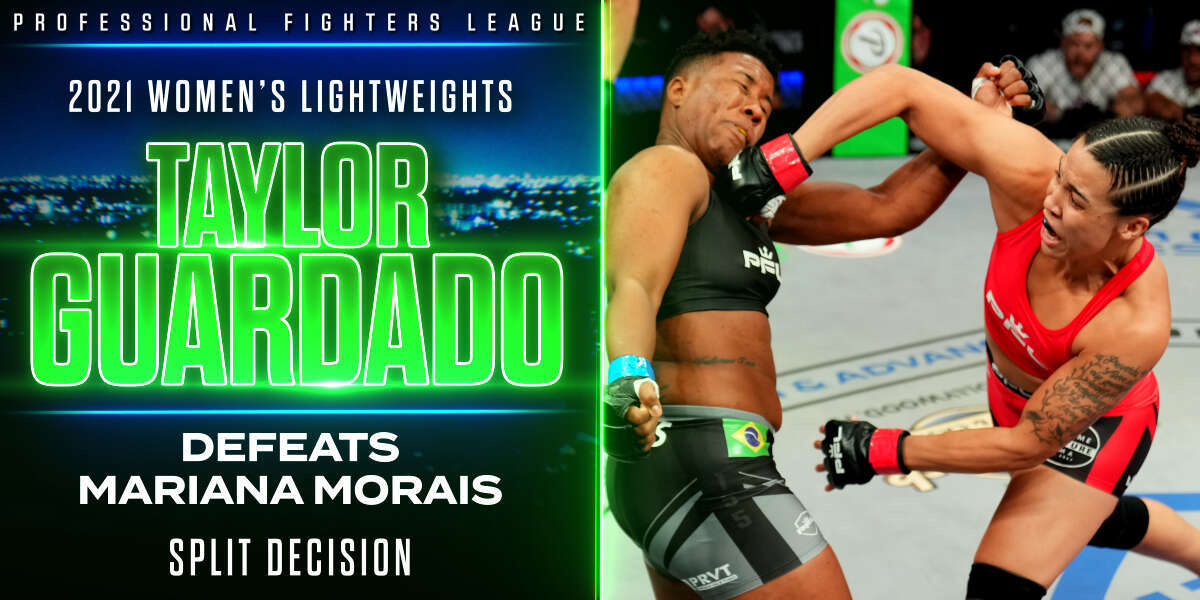 Mariana Morais received the second chance of a lifetime Thursday evening during the PFL Playoffs.

Originally eliminated from the Playoffs,  No. 5 seed Morais received new life in the tournament when No. 1 seed Larissa Pacheco missed weight, forcing her out of the competition. As a result, Morais got bumped back into action against No. 4 seed Taylor Guardado.

Could Morais seize this second chance and take another step toward the $1 million prize, or would Guardado spoil the Cinderella story?

Guardado opens with a leg kick which misses the mark, and Morais circles away. A right hand finds its home for Guardado, then she goes back to the low kicks. Morais is swinging heat back, but she’s coming up just short on the end of her punches early.

There’s the wrestling from Guardado. She clinches and hits a beautiful throw, taking Morais to the mat. Showing some resiliency, though, Morais pops right back to her feet and secures a hip toss of her own, planting Guardado on her back and landing in side control.

Guardado recovers half guard, creates space, and stands. Morais is looking for a guillotine, but it’s not there as they’re pressed against the cage. They separate with 40 seconds left in the round, and Morais lands a nice inside low kick.

Morais appears to be gaining confidence as this round stretches on, and she lands a few more solid strikes as the first frame comes to a close.

Guardado opens the second round with a low kick, followed by a high kick that Morais partially blocks. One minute in, and Guardado gets the takedown, landing in Morais’ full guard.

Midway through the second round, and Guardado is still in Morais’ full guard. While not the most exciting tactic, Morais is showcasing nice defense from the bottom, tying up Guardado and preventing her from mounting any significant offense.

The referee’s seen enough, and he stands them up. Morais slings a heavy right that just misses upon the reset. Nice counter right from Guardado finds a home as Morais rushes in with punches.

The round ends with them trading strikes on the feet.

Guardado lands a big right hand to open the round, but Morais is game, pressing forward and coming back with shots of her own.

They clinch, and Morais is able to turn Guardado’s back to the cage and work some knees. Guardado creates space and separates, returning to the center of the cage. Check hook lands for Guardado as Morais presses forward once again.

Guardado snatches a leg and clinches, but Morais counters beautifully with another hip toss. She’s in Guardado’s half guard.

From there, Morais maintains top position and rides out the fight. Good luck to the judges here.

Clearly, this was a close fight. The judges certainly agreed, as it went to a split decision.

In the end, two judges saw it for Guardado, granting her the win and a spot in the PFL World Championship. She’ll face the winner of Thursday night’s main event between Kayla Harrison and Genah Fabian with $1 million and the PFL women’s lightweight title on the line.