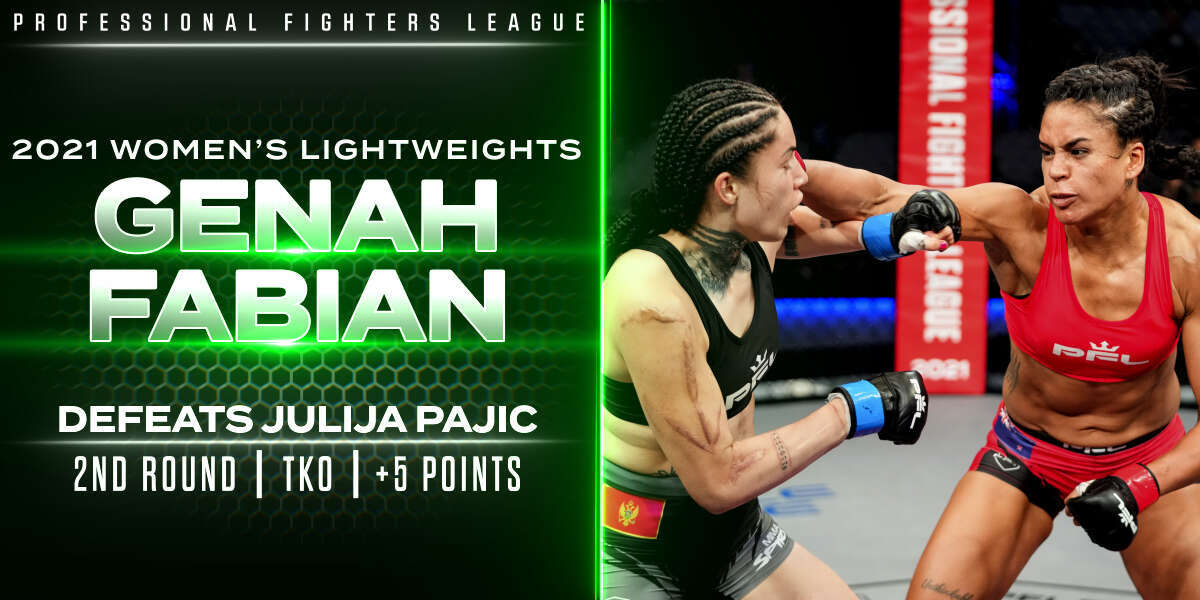 Despite defeating Laura Sanchez via unanimous decision back at PFL 3, 2021 in May, Genah Fabian felt she still had something to prove against Julija Pajic at PFL 6, 2021.

A 7-2 pro kickboxer and former track star, Fabian is an elite athlete with explosive power, a point documented by her two knockout victories in four professional MMA fights.

Pajic is more than qualified in her own right though, boasting an identical 3-1 pro record with three finishes (two submissions, one knockout). Impressive as that is, Pajic’s undefeated run was derailed in May by Larissa Pacheco, putting her on her heels as she entered this fight against Fabian.

No glove touch here, and they’re immediately bouncing, feeling out each other from range. Fabian feints and paws with a jab, getting a feel for her opponent. High kick from Pajic misses. It’s Fabian controlling the center of the cage early, with Pajic content to circle and counter. Fabian appears to see everything coming, and she’s smartly using distance to her advantage to avoid any punishment early.

Nice right hook from Fabian lands on the temple, putting Pajic in defense mode. Fabian clinches and lands a series of shots, but they separate and Pajic smiles, seemingly recovered and ready to get back to throwing hands (and knees and shins).

They clinch again, but nothing’s there, and they separate once more. Lead low kick from Pajic lands, and Fabian responds with a combination up top. Nice counter straight left lands for Fabian, and the round ends there.

Pajic looks a little more urgent here in Round 2, coming out and throwing a low kick early. Two more kicks from her find the mark. Fabian regains the center of the cage and once again becomes the aggressor, pushing Pajic backward. Right low kick to left body kick lands for Fabian — slick combo there.

Pajic repeatedly taunts Fabian, trying to draw her into a slugfest, but Fabian isn’t having it. Strong left from Fabian lands, sending Pajic’s mouthpiece flying. Pajic points to the mouthguard, and referee Vitor Shaolin gives her a moment to collect it.

They return to action, and Fabian gets back to work, stunning Pajic with a right high kick. She pounces and unloads, landing a short left that sends Pajic to the mat for good. The referee steps in, and this is a wrap.

That’s five points for Fabian with the second-round finish, giving her eight points total in the season and securing her spot in the 2021 PFL Women’s Lightweight Playoffs.