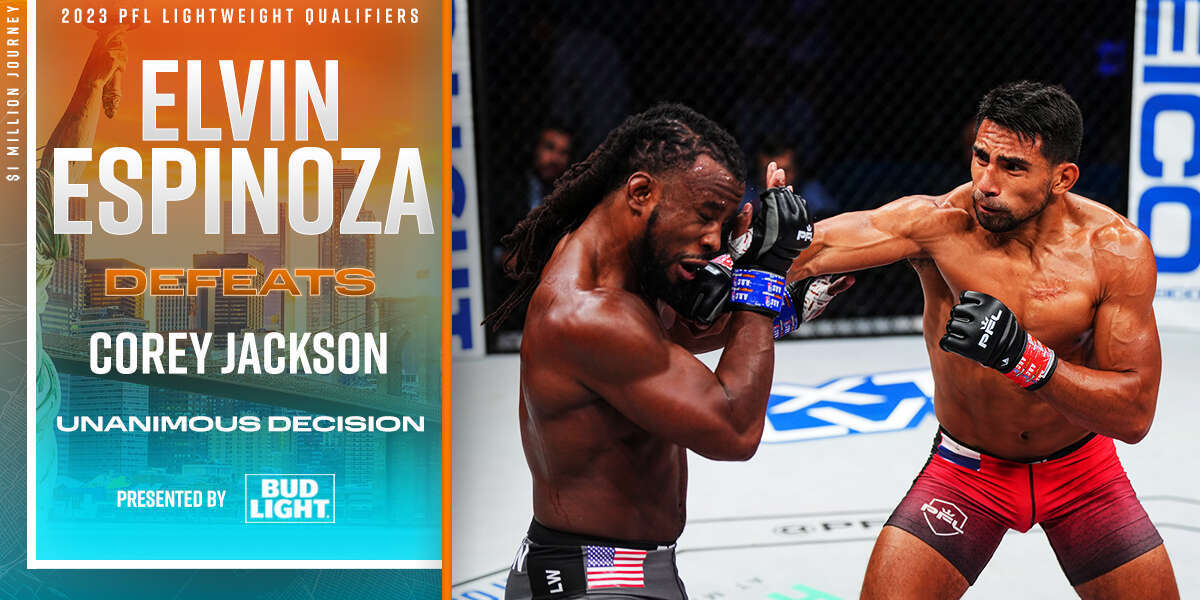 Elvin Espinoza Secures his Spot on the 2023 PFL Challenger Series

The Challenger Series Qualifiers roll on as Elvin Espinoza (6-0) takes on Corey Jackson (5-1). A highly touted prospect, Espinoza’s undefeated record consists of 3 knockouts and 3 submissions, good for a 100% finish rate and proving how well rounded his game is. Jackson, a former XFN Featherweight champion, suffered his only career loss under the Bellator banner. Jackson had 3 fights canceled over a 2.5 year period and says that staying motivated during that time was a massive challenge.  We’ll see if he’s ready to step up to the plate and punch at ticket to the 2023 PFL Challengers Series

The fight begins and Jackson wastes no time, landing a low kick before stunning Espinoza with a big hook. In response, Espinoza is leaning on the grappling and trying to make it a dirty fight in the clinch. Espinosa almost finishes an outside trip but can’t quite secure control as Jackson quickly pops back up to his feet.

Espinoza is really digging for the takedown but Jackson is doing a good job fighting him off, staying low and wide with his base and not ceding an inch. They continue to jockey for position along the SmartCage with neither fighter having a clear advantage so far.

Finally, Jackson is able to reverse position and get his back off the fence, but only briefly as Espinoza quickly reestablishes position. Jackson starts firing some knees to the body and is able to flip the position once again, circling off and securing the double underhooks with a minute remaining in the round.

Jackson takes the back and looks for a takedown of his own but can’t finish as Espinoza turns into him. The fighters briefly break the clinch and Jackson fires a 1-2 and Espinoza goes right back to it, driving Jackson into the SmartCage to end the round.

The 2nd round begins and Jackson seems to want to press the action now, attempting to hold the center of the SmartCage as Espinoza presses forward. Espinoza lands a kick to the body but Jackson returns fire with a right hook that lands flush, both men seem to want more action as the fight progresses.

Jackson has just missed on a handful of big lead hooks now but he’s been looking to set that up consistently. Again, Espinoza catches a kick and uses it to change levels and clinch before driving Jackson to the mat. The takedown is very brief and not accompanied by dominant position as Jackson pops back up only to be dragged back down. Again, Jackson gets back to his feet and one can sense some frustration from Espinoza as he can’t seem to find the answer here.

With 2 minutes to go Espinoza is again controlling position along the fence before Jackson is able to break and circle off and they’re back in the center with 90 seconds to go in the round.

Jackson throws a straight right but can’t connect as neither fighter seems willing to stay in the pocket and trade for a prolonged period.

Espinoza finally lands a nice flurry of his own as the round comes to a close. This is a tough fight to score and it’s anybody’s heading into the final round!

The final round is underway and both fighters seem to be showing some more urgency and willingness to stand and bang as they compete for a shot on the PFL Challenger Series.

The exchange in the pocket however is fairly brief as Espinoza again looks to clinch.  Espinoza now chains together some strikes into a takedown attempt that he cannot finish. After some more jockeying, Espinoza lands a nice throw but again can’t establish control as they’re right back to their feet.

Espinoza seems to be the fresher man in the 3rd here as he fires a hook uppercut combo before changing levels again and getting the takedown. Again though, he’s unable to maintain control and Jackson quickly works back to his feet.

Halfway through the round and it feels like Espinoza is starting to pull away as the live odds balloon to -700. On that note, Jackson lands a big short uppercut in the clinch, causing Espinoza to once again change levels in an unsuccessful bid for a takedown.

Espinoza needs to be careful as he almost winds up on bottom after a failed inside trip, but there seems to once again be a stalemate as neither fighter seems able to improve position.

Espinoza secures a takedown and some control as the round winds down before landing a big left hook for the road at the bell.

Elvin Espinoza will be fighting in the 2023 PFL Challenger Series after a hard fought decision win!