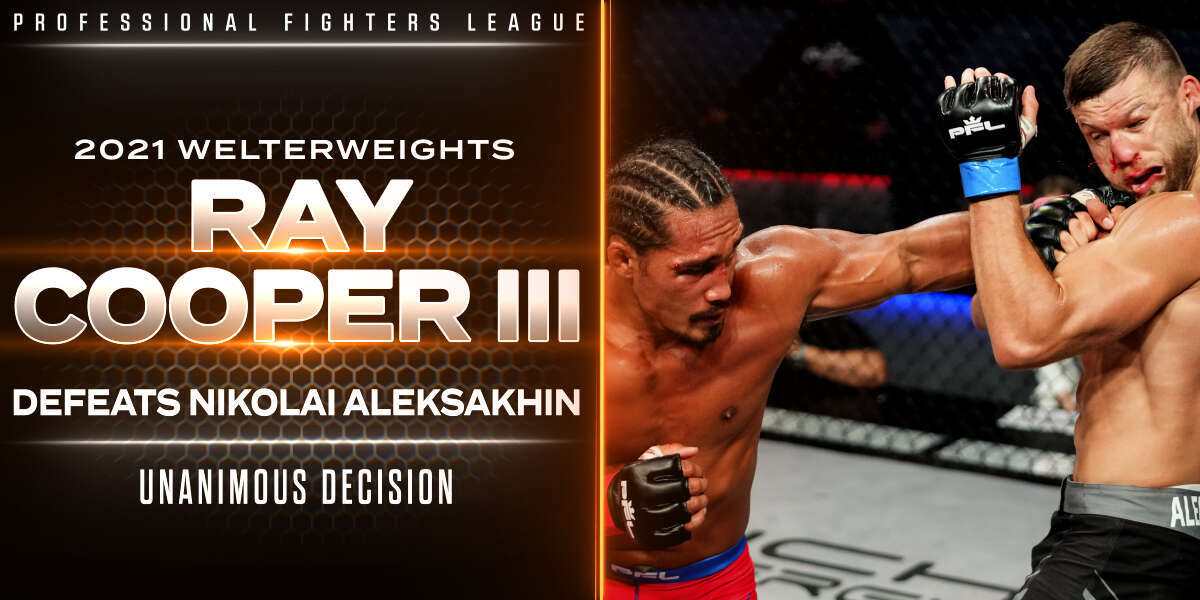 On paper, the PFL 5, 2021 Welterweight showdown between Ray Cooper III and Nikolai Aleksakhin represented a clear Fight of the Night favorite.

Cooper is a devastating finisher and stands as PFL’s most decorated knockout artist of all time, earning two knockouts and one submission in his last three fights.

Aleksakhin can hang too, and he’s proved it by knocking out 11 opponents and submitting two more en route to an impressive 24-5 (one no-contest) record as a professional.

So could they deliver on the high expectations?

Cooper’s counters look sharp early, as he’s catching Aleksakhin with powerful shots from range. Cooper closes in with a takedown attempt, but Aleksakhin hits a beautiful hip toss to put Cooper on his back.

Smartly, Cooper rides the moment and reverses position immediately, landing a pair of hooks that appear to stumble Aleksakhin. The two re-engage in the clinch after a brief striking exchange, Cooper putting Aleksakhin’s back against the cage.

Cooper looks for the trip, but Aleksakhin wasn’t having it. They disengage. These dudes are throwing heat early, with both men landing on their feet. Aleksakhin attempts a jumping knee, and Cooper shuts that down with a check left hook.

Ninety seconds remaining in Round 1, and Aleksakhin finds his groove with some straight punches. Cooper walks through them and fires off a strong combination of his own, finishing with a takedown attempt against the fence. Cooper’s on a single, but Aleksakhin’s takedown defense is impenetrable early.

Front kick, punches, and a knee down the pipe all land for Aleksakhin as Cooper counters and the round comes to an end. Needless to say, those Fight of the Night expectations are holding up thus far.

Both men pick up where they left off in Round 1. One minute in, the two trade front kicks, and Aleksakhin circles away from Cooper’s power and attempts to settle in to find his range. Cooper gives him no room to breathe, though, and the chase is on.

Two nice jabs from Cooper are followed by a straight right, but Aleksakhin answers with a beautiful uppercut-left hook of his own. Two minutes remaining in the round, Aleksakhin presses Cooper against the cage, only to be reversed in short order.

Cooper eats a knee from Aleksakhin and returns fire with a body shot of his own. Finally, Cooper drags the fight to the mat, but Aleksakhin is right back to his feet, Cooper sticking to him and giving him no room to work.

This fight could be going any way on the judges’ scorecards. Aleksakhin needs a finish here to qualify for the 2021 PFL Playoffs regardless.

He clinches and lands a series of knees on Cooper, forcing the Hawaiian to dive in on a takedown. Cooper gets it, slamming Aleksakhin to the mat. A scramble ensues, and it’s Cooper working to take the back of Aleksakhin. With his opponent against the cage, Cooper can’t work to the back, so he settles for a series of knees to the legs and body of Aleksakhin.

Frustration sets in for Aleksakhin, who just can’t shake Cooper here. He’s scrambling and hand-fighting, but Cooper continually adjusts and drags him back to a defensive position. Finally, Aleksakhin cuts away, but Cooper is back on his legs for another takedown attempt.

They separate, and Aleksakhin throws a knee on the break. Thirty seconds remaining, Aleksakhin throws a 1-2 that misses its mark. Cooper continues to stalk, and this time it’s Aleksakhin shooting for the takedown. Nothing home. The fight ends after 15 hard-fought minutes inside the welterweight division.

With more takedowns and more total strikes, Cooper secures the victory and his spot in the 2021 PFL Playoffs. Despite being ineligible to earn  points in the bout for missing weight, Cooper moves on, while Aleksakhin is officially eliminated from contention.

Along with Cooper, Joao Zeferino and Rory MacDonald have punched their tickets to the Playoffs. Magomed Magomedkerimov is clinging to the fourth and final spot with four points, but Gleison Tibau can upset that with a first- or second-round finish of MacDonald in the PFL 5, 2021 main event.