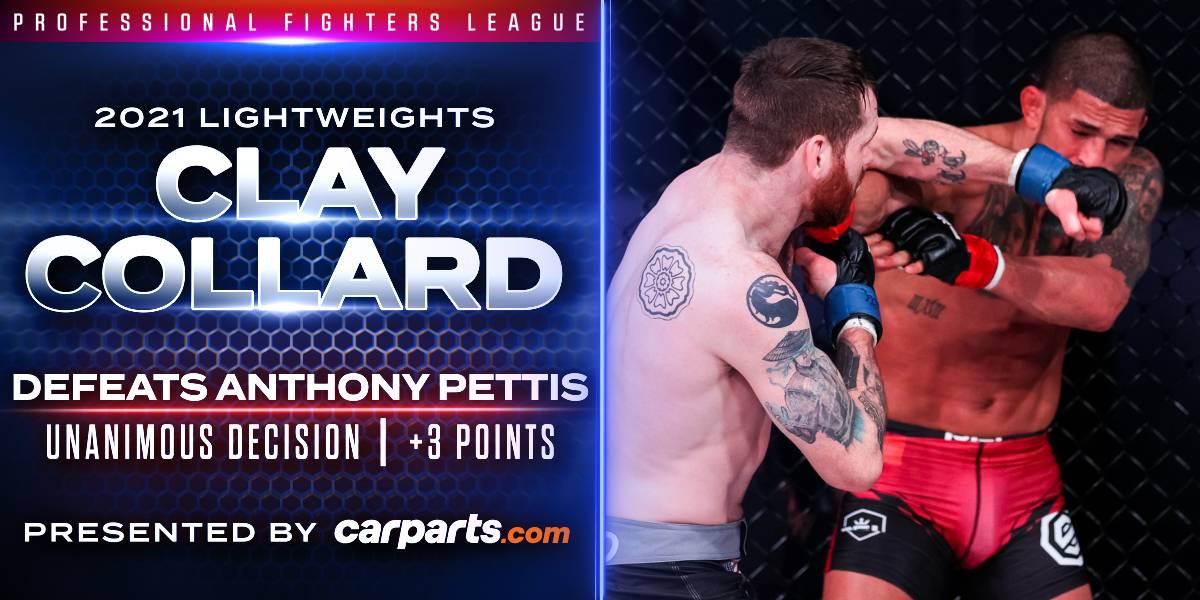 The 2021 Professional Fighters League lightweight season kicked off with a bang as former WEC and UFC titleholder Anthony “Showtime” Pettis (24-11) collided with fellow UFC veteran and boxing star Clay Collard (19-8, 1 NC). The pair headlined the first event of the year from the Ocean Casino Resort in Atlantic City, N.J., with both fighters aiming to put their stamp on the league in their first Decagon appearance. With 21 combined knockouts — as well as 10 submission finishes — on their collective records, Pettis and Collard did not disappoint as they began their chase for the league’s title and $1 million-dollar prize.

Collard immediately took the center of the cage and fired combinations. He pressured Pettis to the fence. Pettis fired a left head kick, but Collard took it well. A left hook from Collard caught Pettis flush on the chin. Collard mixed in kicks to keep Pettis off balance. Pettis went for a cartwheel kick and landed on his back. He implored Collard to enter his guard, but the veteran Collard forced him to stand. A flurry of body shots from Collard was answered with a knee from Pettis, but he slipped and landed on his back once more. A counter right from Pettis found its mark as Collard marched forward. It was followed by multiple kicks from Pettis to close the frame.

Pettis went to work with low kicks to open round two. He followed them with a right hand. Collard backed Pettis against the fence, but he was unable to keep him there. Collard blitzed forward with a flurry of body punches. Pettis fired a jumping knee, but Collard took it well. Collard rocked Pettis along the fence with a left hand and Pettis fell to the canvas. He was able to survive, but Collard sensed a finish and unloaded with punches. Pettis ate another heavy shot, falling to the canvas a second time. The referee took a long look at the action as Collard rained right hands and Pettis tried to recover. A desperate Pettis attempted a triangle from his back, but Collard wisely returned to his feet as the horn sounded.

Despite the punishment in round two, Pettis came out firing kicks in the last frame. Collard caught a kick and dumped Pettis to the canvas. As he stood, Collard caught him with a power right hand. A pair of wheel kicks from Collard missed their target as the pace slowed. A left head kick from Pettis dropped Collard with a minute left. Pettis followed it with a knee, but Collard somehow ate it. Pettis dove into the guard of Collard on the mat and then transitioned to the back, but he couldn’t find a finish.

The back-and-forth battle was sent to the New Jersey commission for their final tallies. The judges awarded the underdog Collard the victory, who picked up three points in the lightweight standings.