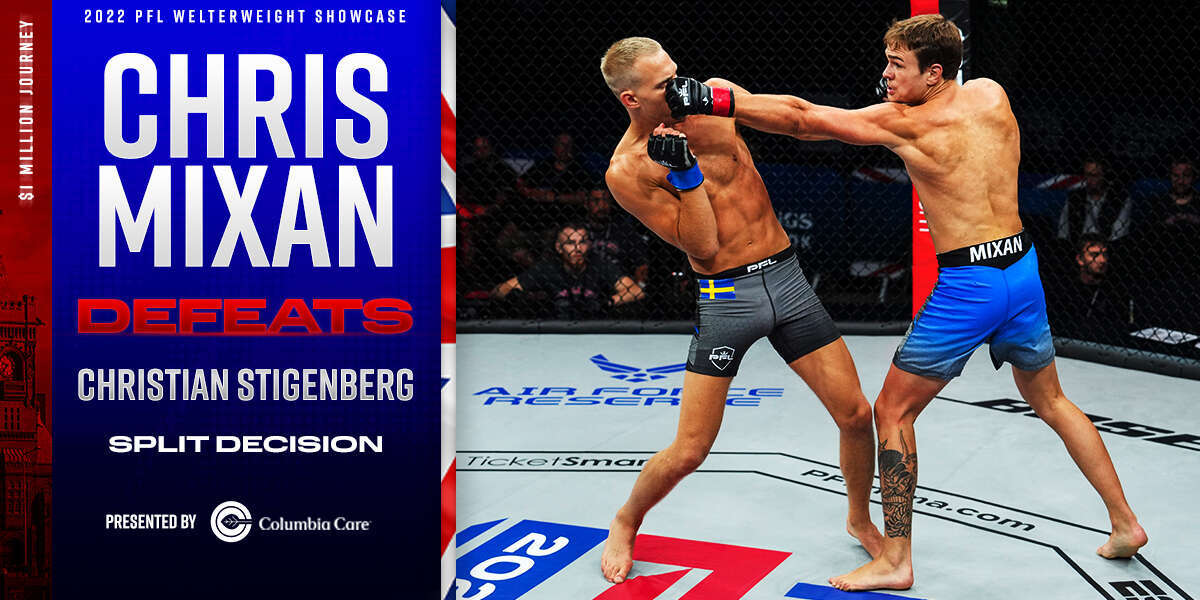 Undefeated 23 year old Chris Mixan (3-0) enters the PFL SmartCage following a win on the PFL Challenger Series in February to take on Christian Stigenberg (3-1), a two-time Swedish amateur MMA champion.  Notably, Mixan is fighting for his late mother who passed away in October and for his family still residing in war torn Kharkiv in the Ukraine.

The fighters touch gloves and we’re off as Stigenberge looks to establish control of the center of the SmartCage. Stigenberg is getting some offense off early, landing a low kick and a nice counter left hook as Mixan enters the pocket.

Mixan is making a point early on going to the body. Stigenberg is doing a good job using that counter left hook to keep Mixan at bay when he looks for those big body shots.  It appears Mixan is waiting for a big counter opportunity but he will eventually need to go first to have success.

Stigenberg continues with the low kicks and finally Mixan lands the big right he’s been looking to set up, but Stigenberg fires right back and is still coming forward and pressuring.

Now, Mixan lands a big left hook of his own as Stigenberg enters the pocket but Stigenberg is undeterred, continuing to march forward and return fire. Stigenberg is doing an excellent job fighting behind his kicks and jab and not telegraphing anything as he cuts off the cage and controls the distance.  Mixan overextends on a big right and Stigenberg makes him pay, landing a nice 1-3 combo before they reset.

Again Mixan lands that big right but Stigenberg continues to pour it on, firing low kicks and mixing in combos up high.  As the 10 second clapper hits, both fighters throw caution to the wind and swing big with both men landing in the exchange.

The second round begins and Mixan seems to be showing much more urgency and willingness to go first, landing a handful of nice punches as Stigenberg looks to read this new tempo.

Stigenberg lands a nice left hook and just misses with a big right behind it and we’re back to Stigenberg controlling the distance and pressuring Mixan against the cage. Mixan lands a jab with a nice right behind it that backs Stigenberg up and sees the fighters return to the center of the SmartCage.

Stigenberg is really starting to land his jab at will now but he’ll need to throw something behind it, and right on cue he goes jab to heavy low kick.  Halfway through the round and Mixan sees to be reverting to his round 1 strategy of waiting for the counter as Stigenberg lands a BIG right hand that draws a reaction from Mixan.

Mixan is having success when he comes forward and throws but so far he’s been unable to do it with consistency.

Both fighters land heavy low kicks in the center of the SmartCage as the live line has now flipped and Stigenberg is a -295 live favorite.

Mixan attempts a high kick but can’t find a home for it as Stigenberg seems able to land his left hand at will as the round comes to a close.

The 3rd round is underway and Mixan will more than likely need a finish to secure a victory here.  Similar to round 2, Mixan comes out gunning with some more urgency but we’ll see if he can keep it up.

Mixan lands a nice 1-2 and he’s coming forward now as perhaps the pace is starting to wear on Stigenberg a bit.

Mixan is doing a much better job going first in this round but he’s still having some trouble landing on the taller, longer Stigenberg.

Oh! Mixan lands a high kick and knocks Stigenberg down, but he quickly recovers.  Mixan sees his opportunity and swarms Stigenberg chasing a finish.  Wisely, Stigenberg engages the clinch to get out of danger for the time being.