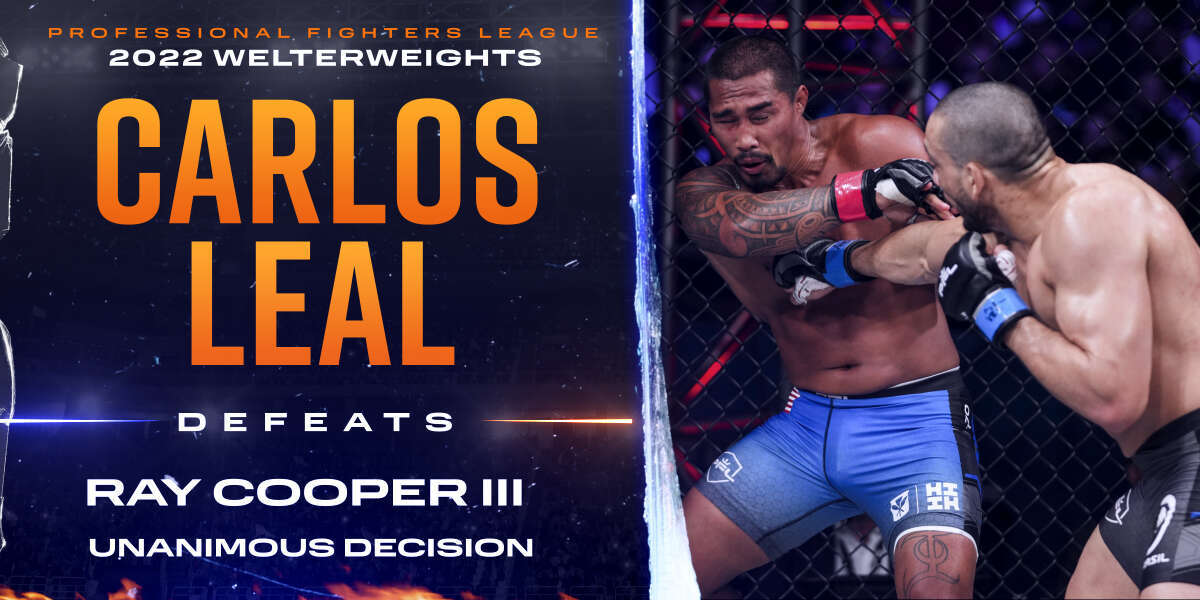 Although “Bradda” Ray Cooper III missed weight and therefore won’t be eligible for points tonight and will receive a -1 in the standings, one of the most exciting fighters in MMA puts his 7-fight win streak on the line tonight. Bradda has quite a list of accolades, including 2 PFL championships and being the only fighter to ever reach the title fight in all 3 of his PFL seasons.  Cooper has also finished 22 of his 24 career victories and is one of the hardest hitters in the sport. All the more impressive, Cooper has achieved all of this while training in his home garage gym in Hawaii with his father and brothers.

No slouch in his own right, Carlos Leal rides a 10-fight win streak into this bout including 2 fights on this season of Challenger Series.  Leal has won Brazilian Muay Thai championships as well as state titles in Brazilian Jiu-Jitsu and wrestling.  Leal prides himself on being a well-rounded fighter and feels he can hang with anyone anywhere.  Leal steps into this bout as a late notice replacement for Magomed Umalatov but assures media and fans alike he stays ready and is prepared to deliver the goods tonight.

Leal shoves Cooper off and lands a nice jab on the break, the fighters briefly separate and Cooper shoots again and again Leal stuffs the attempt and the fighters work for a position on the cage as Leal lands some good knees to the body.

Leal throws some shoulder strikes and Cooper is able to briefly get off the cage but Leal reengages and they’re right back to it.  Leal lands another big knee to the body that elicits a reaction from Cooper.

Cooper briefly gets Leal to the mat but is unable to keep him there and Leal lands a nice 2 punch combo on the break as the fighters get back to the center of the SmartCage.

One has to wonder if the weight miss is affecting Cooper as he seems to be lacking his signature explosiveness as he shoots another takedown from the outside and is again thwarted.  Leal lands a nice knee to the head on the exit as the 10-second clapper hits and Leal will end the round throwing massive knees.

Slightly slower start to this round as Cooper again shoots and can’t get Leal down.  Cooper briefly locks up a single leg and gets the fight to the mat but Leal pops right back up and disengages.

About 90 seconds in Leal lands a MASSIVE body kick that hurts Cooper and follows up with punches up high.  Cooper was clearly hurt there and dove in on a single to keep from taking damage.

They get up and Leal is keeping the pressure on! Cooper shoots again and Leal looks to attack a front choke but gives up on it quickly.  Leal is now on top doing damage and takes the back.

Cooper is able to get back up and rips a big body shot and Leal fires a head kick that partially lands in response.  Leal now chopping down Cooper’s legs and clearly doing damage, Cooper does not look like himself in the SmartCage at all.

Leal continues attacking the lead leg and Cooper appears to be compromised and having trouble moving.  Leal lands a quick right and exits the pocket before Cooper can return and that will be the round, all Leal so far.

Our final stanza is underway and Cooper will need a finish here.  Cooper finally lets the hands go a little bit and then goes right back to attempting takedowns.

Cooper is hurt badly to the body after a big shot from Leal and Leal pursues the finish hard but Cooper is somehow able to recover.

They break the grappling and Leal throws some brutal grounded body knees, ref is looking real close as Cooper appears to be wilting and taking big damage to the body with knees and punches.

Leal might be running out of gas here from the sheer output, he’s landed a staggering 132/162 strikes halfway through the 3rd round.

Finally, some offense for Cooper as he lands a big left hook followed by an uppercut and now it’s Leal shooting a naked takedown and getting stuffed as Cooper looks for a high elbow standing guillotine.

Leal hand fights well and they break and are back to the center of the SmartCage.  Cooper lands some BIG shots and appeared to briefly stun a now tired Leal but it might be too little too late at this point.

With 10 seconds to go Cooper tees off and lands some bombs, opening a cut under the eye of Leal as the fight ends.

Very out of character performance for Cooper but can’t take anything away from Leal there, that’s how you make your PFL debut against the 2x champ! That’ll be 3 points for Carlos Leal in a wide-open welterweight division.