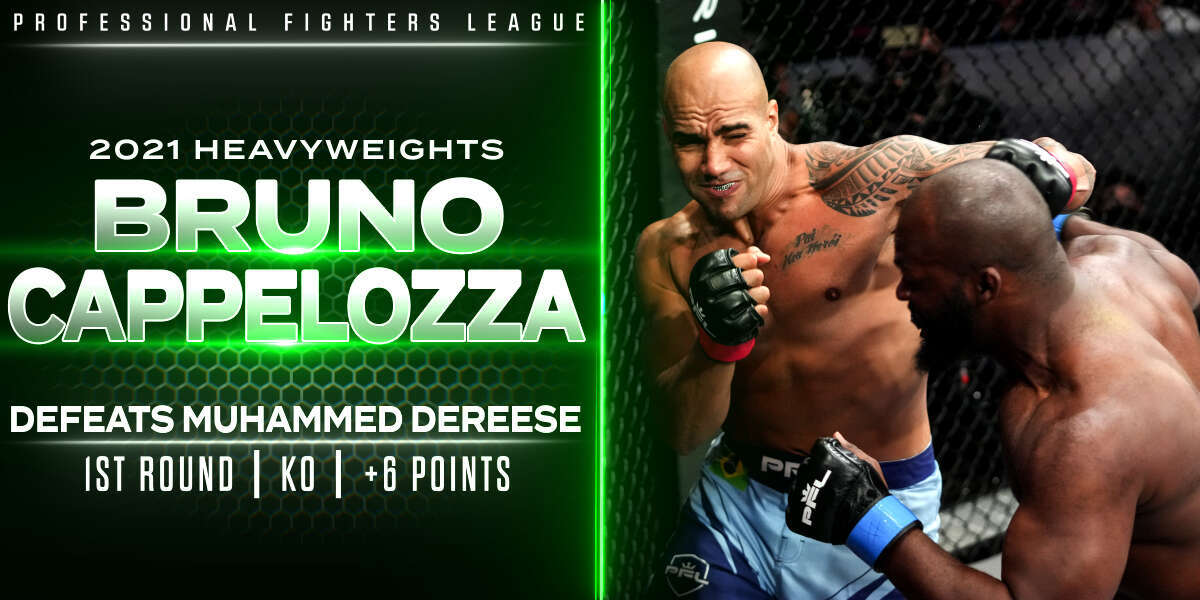 For Bruno Cappelozza, the situation was simple against Muhammed Dereese at PFL 6, 2021: Win and advance to the PFL Playoffs.

The Brazilian Cappelozza knocked out Ante Delija at PFL 3, 2021 back in May, earning six points in the process and giving him full control of his Playoffs destiny.

Dereese, meanwhile, hasn’t fared as well, losing back-to-back bouts inside the PFL cage. He needed to bounce back and earn a first-round finish if he wanted any chance of a Cinderella run.

Could he get it done?

This wasn’t the play, though, as Dereese eats a powerful counter in the process and falls to his knees. He clings to Cappelozza briefly, but they separate and the Brazilian tosses Dereese to the mat with authority. No follow up, just a separation and more striking, where Cappelozza is firmly controlling the action.

More leg kicks from Cappelozza land, while Dereese continues to swing away with the overhand right. Dereese does appear recovered now after the early scare, with three minutes left in the round.

That’s short-lived though, as Cappelozza catches Dereese with a short left hook. It’s the beginning of the end, as another hard series of punches and a head kick land, putting Dereese away for good in short order.

That was vicious and definitive.

Six more points for Cappelozza, giving him 12 total, and he’s all smiles and laughs post-fight. For good reason, too. What a performance from the Brazilian. He’ll enter the Playoffs with considerable hype and momentum.

Interestingly, the win from Cappelozza also clinches Ante Delija a spot in the Playoffs. It’s now up to Brandon Sayles to defeat Denis Goltsov if he wants to clinch the fourth and final spot. Otherwise, it goes to Jamelle Jones, whose first-round finish kicked off the PFL 6, 2021 card.