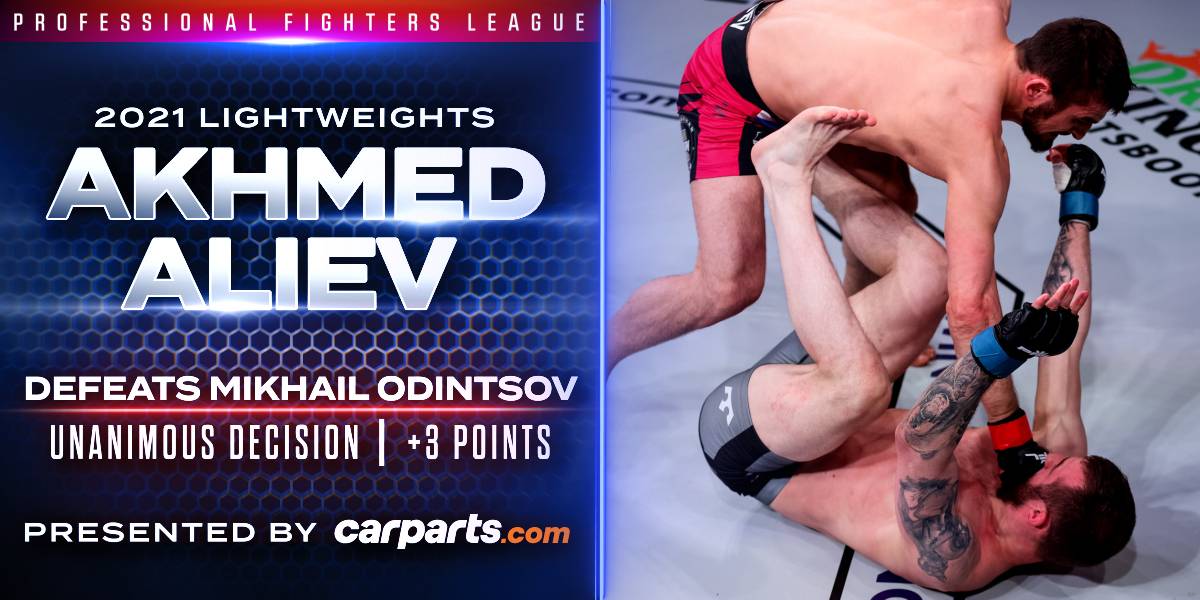 Aliev Too Much for Odintsov, Claims Decision Victory

One of last season’s lightweight semifinalists, Akhmed Aliev (20-6) of Dagestan returned to the PFL cage looking to build on his prior performance. Standing in his way was PFL International Qualifier Series winner Mikhail Odintsov (18-3) of Belarus. The matchup impacted the regular season standings before either fighter stepped foot in the cage, as Odintsov missed weight for the bout. He was deducted one point in the standings and was ineligible to earn any points from the fight with Aliev. Meanwhile, Aliev was awarded three points in the standings and looked to gain bonus points with a finish.

Odintsov fired a series of kicks early. Aliev just missed with a head kick before Odintsov changed levels for a takedown attempt. Aliev stuffed the shot and then scored with a massive belly-to-belly suplex. Aliev stayed heavy from inside the guard of Odintsov, landing short punches. The fight returned to the feet and Aliev missed with a wheel kick attempt. A right uppercut caught Odintsov clean on the jaw as he looked for a takedown. A big right hand from Aliev hurt Odintsov late in the round and he flurried with punches. The bell saved Odintsov from further punishment.

Aliev came out swinging in round two. Odintsov threw a body kick and shot for the legs of Aliev, but he was unable to secure a takedown. Aliev sat back and looked to counter the advances of Odintsov. A head kick from Aliev was blocked by Odintsov. A right hook by Odintsov caught Aliev by surprise and allowed the Belorussian to clinch. Aliev separated and stalked Odintsov along the fence. He missed with another wheel kick before entering the clinch and pinning Odintsov against the cage. A low blow caught Odintsov in cup just before the close of the round.

The two fighters exchanged body shots in the opening moments of the third frame. Aliev caught the midsection of Odintsov with a kick. A spinning backfist from Odintsov just missed and Aliev returned fire with a head kick. Aliev looked for another spinning kick, but Odintsov ducked under the flashy technique. Aliev picked up his output late in the fight as he mixed up his strikes. Odintsov was unable to mount offense late as the fight was sent to the scorecard.

While the result had no impact on the lightweight standings due to Odintsov’s weight miss, Aliev’s effort earned him the unanimous-decision victory.