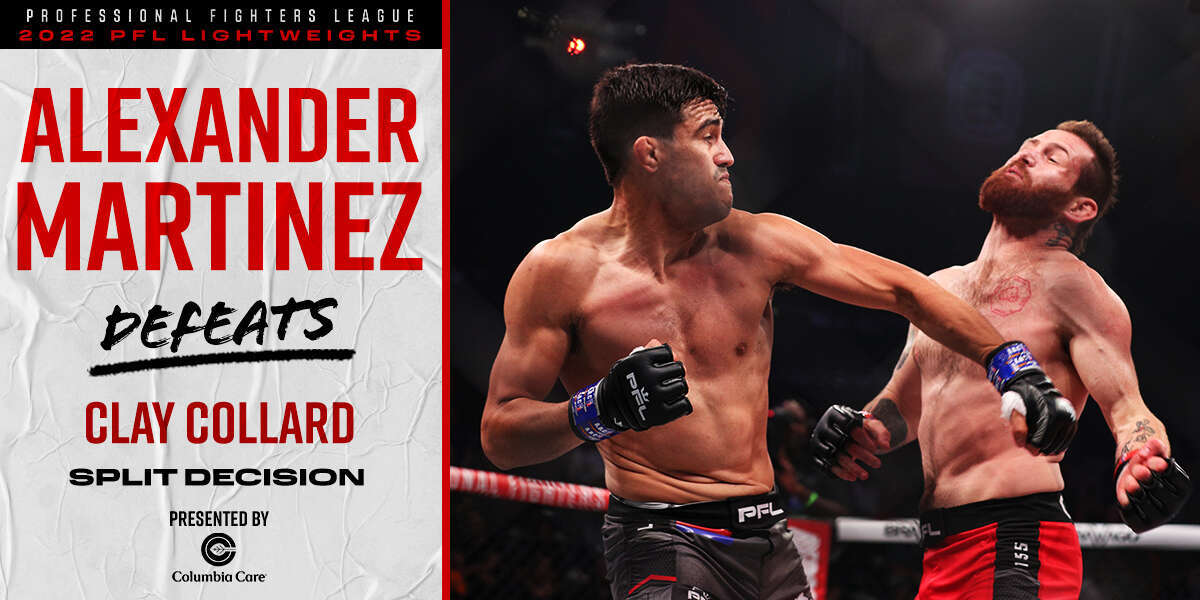 In the main event of the evening, a pair of 2021 PFL Semifinalists clash as “Cassius” Clay Collard (21-9) meets Alexander Martinez (9-2) in a bout that will see the winner clinch a playoff spot and the loser eliminated from contention.

A lifelong martial artist, Collard is still aggrieved by what he feels was a robbery in the 2021 Semifinals against eventual champion Raush Manfio.  In his first bout of the 2022 season, Collard put on a fight of the year contender against former UFC standout Jeremy Stephens and picked up 3 points for the decision win.

Finding himself in a very similar position, Martinez, the youngest fighter in the PFL Lightweight Division, also dropped a decision in last year’s semifinals and won a decision in his opening bout of the regular season against Stevie Ray. He has finished 6 of 9 career wins and looks to punch his ticket to the PFL Playoffs for the second straight year with a win tonight.

And our main event is underway! Both men throwing early with Collard rushing in and cutting angles well before getting clipped by a Martinez lead hook on the entrance.

A minute in and Collard initiates the clinch before breaking and landing 2 big, clean hooks on the break.  Collard is doing a fantastic job with those patented body hooks early, draining the gas tank of Martinez and using the bodywork to initiate clinch exchanges.

Collard catches Martinez low before having his glove fixed by the commission.  They restart the action and it’s more of the same, with Collard still working the body.

Collard is able to secure the takedown and posture up and drop some big shots down on Martinez before disengaging.

Martinez throws a head kick that Collard is able to catch and use to sweep him to the ground, once again dropping some big ground and pound.

Collard briefly gets the back and sinks in a rear-naked on the feet but Martinez smartly turns his hips in and gets out of danger.

More wild exchanges on the feet as Collard lands a power jab and some more body work before Martinez shoots and gets Collard down, trying to posture up and do some damage as the round ends.

After a frantic round 1, it’ll be interesting to see if these fighters can keep this pace as Collard has stressed his cardio is better than it has ever been.

The round begins and the first big strike is a counter hook landed by Collard.  Martinez is now looking to establish his jab and is having some success, opening a small cut on Collard’s nose as Collard goes back down to the body and follows it up with a leg kick, a little dutch kickboxing from the boxer/wrestler.

Martinez initiates the clinch but Collard is able to break quickly and again fires that low kick.

Collard appeared to have the armbar locked in but Martinez is able to escape once again and a frantic scramble ensues.  Martinez takes the back and sinks in a DEEP rear-naked choke. Collard appeared very close to tapping but fights the top hand and escapes, giving the crowd a little tongue-out action!

MARTINEZ LOCKS IN A CHOKE!
COLLARD SURVIVES! THE CROWD IS ON THEIR FEET#2022PFL4 pic.twitter.com/1GsWfV42IZ

Martinez rides out the round on Collard’s back attacking subs and throwing shots, what a fight!

Our final round of the night is underway and this round will likely decide who makes the playoffs and who goes home.

Martinez opens with a heavy leg kick and again Collard attacks the body with 2 vicious hooks before Martinez is able to get the fight to the ground.  Collard wisely works his way to the cage and attempts to create some space and get back to his feet.

Incredible grappling exchanges as neither man can keep top position but Collard is again able to work back to his feet.  Collard shoots a takedown of his own but has to be careful as he lands right in a guillotine choke.

Collard keeps his composure and wisely disengages from the grappling exchange.  Collard catches Martinez with another body shot and it’s difficult to tell how much was damaged and how much was a slip but Martinez goes down.  Collard however won’t be baited and calls for the standup again.

The frantic grappling continues as Martinez attacks a takedown and Collard attacks a kimura in response.  Collard briefly had the kimura deep but loses it and Martinez winds up on top as the clock ticks down.

Martinez will finish the fight on top after an extremely difficult to score 3rd round.  This fight absolutely delivered and was nonstop action from bell to bell!

Alexander Martinez gets the upset and advances to his 2nd straight PFL Playoffs! Meanwhile, Clay Collard continues to establish himself as one of the most exciting action fighters in the sport.