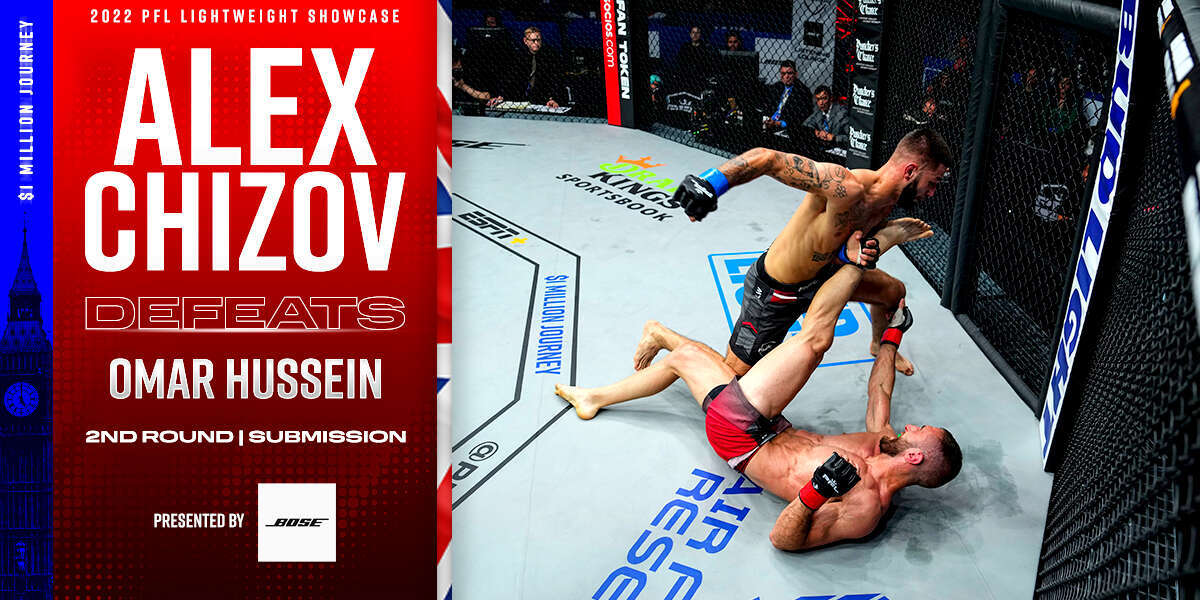 We continue the action in London with a Lightweight Showcase bout between Omar Hussein (9-3) and Alex Chizov (9-1).  Continuing a theme of new nations in the SmartCage tonight, Hussein becomes the first Palestinian fighter to compete under the PFL banner. Not to be outdone, at only 24 years of age Chizov will be the first Latvian fighter to compete for the promotion as both men look to establish themselves and earn a potential future PFL appearance. Interestingly, this will only be Hussein’s 3rd career fight at Lightweight as he looks to find himself in the sport at only 26.

There will be no touch of the gloves as it’s all business between these 2 early!  Chizov takes the center of the SmartCage and lands a heavy inside low kick with a big right hand behind it.  Hussein appears hurt by that right and begins to move laterally attempting to escape the danger.

Chizov is undeterred, walking him down and mixing up his attacks to the body and head. Chizov just misses on a potentially fight ending left hook and Hussein uses the overextension to change levels and attempt a takedown but is quickly stuffed.

They reset and Chizov is right back on the offensive, pressuring Hussein against the cage and pushing a very high striking pace with over 25 strikes thrown through 2 minutes.

Chizov lands big again! Hussein stumbles and Chizov swarms him before Hussein smartly takes the fight to the ground but he’s not out of danger yet as Chizov immediately sweeps to top control.

Chizov postures up and lands big before disengaging and letting Hussein back to his feet, instantly landing a big knee to the body that appears to hurt Hussein.  Chizov is chasing the finish with a minute remaining in the round as Hussein appears to be in survival mode early.

Chizov throws a head kick that Hussein is able to block but he still drops to his back, perhaps hoping Chizov will engage him on the mat but Chizov lets him back to the feet and keeps the pressure on.

Hussein commits big to a double leg takedown and succeeds this time and he attacks a ninja choke with only seconds remaining in the round! The choke gets in deep and Chizov may have been saved by the bell, what a round!

The 2nd round begins and again it’s Chizov coming forward but Hussein lands a nice counter right and perhaps he’s got a 2nd wind after that deep choke attempt.

Hussein strikes into another takedown attempt and secures it, landing in a heavy top side control in his best sequence of the fight so far.  Hussein appears to be attacking an arm triangle choke but can’t quite secure the arm as Chizov stays busy working on the bottom.

Chizov gives his up back in an attempt to get back to his feet and Hussein makes him pay, sinking the hooks in and attacking a rear naked choke with almost 3 minutes to work.

Hussein is relentlessly attacking the neck as Chizov fights the hands and uses the fence to prevent Hussein from getting the correct angle to finish.  Suddenly, Chizov explodes off the SmartCage and reverses position! Chizov postures up and lands a bomb of a right hand! Now it’s Chizov attacking an arm triangle before passing to full mount with 90 seconds to go and he starts raining down right hands!

The ref warns Hussein to defend and he obliges, rolling and giving up his back and now it’s Chizov attacking a rear naked of his own! That's tight and there’s the tap! Chizov wins an incredible back and forth affair by submission!

Alex Chizov impresses on the feet before finishing with some club and sub action!