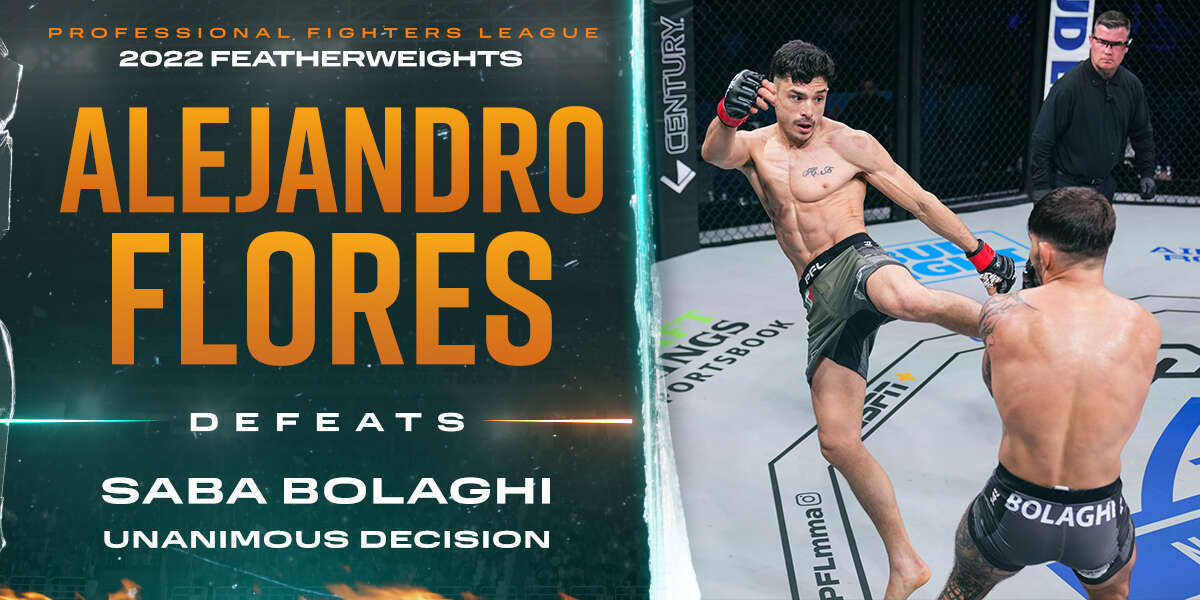 PFL kicks off its second event of the season with 2 hungry debutants as Mexico’s Alejandro “El Gallito” Flores (20-3) meets Germany’s Saba Bolaghi (14-2-1) in a featherweight bout. Flores picked up his 3rd consecutive win in a PFL showcase fight last August, while Bolaghi will be riding a 2-fight win streak into his first appearance on American soil. This is a classic striker v. wrestler match up and it should be fascinating to see who will reign supreme as Flores, a well credentialed kickboxer, looks to impose his gameplan on Bolaghi who was at one point a member of the German national wrestling team.

One of these fighters will walk out of the Smartcage at the top of the featherweight standings for the moment, let’s see who it’ll be!

The fighters touch gloves and we’re off!  Flores looks to control the center of the Smartcage and whips a hard leg kick at Bolaghi to open us up.  A minute in, Flores is doing a good job keeping the fight at kickboxing range and peppering small kicks to maintain distance.

Both men appear to be feeling out range, but Bolaghi is having trouble closing distance, he throws 2 wild overhands and threatens with level changes behind them but there’s nothing there.

2 minutes in, Bolaghi is able to initiate the clinch and now we’ll have some questions answered.  Bolaghi is using an underhook and some good shoulder and head pressure to keep Flores against the cage and hit some small punches.

OH! Suddenly Flores changes levels and attacks a high crotch, tossing Bolaghi to the mat.  Bolaghi gets right back to his feet and never let go of his underhook, allowing him to directly reenter the clinch and get back to grinding the fight out against the cage.

With about 1:20 remaining in the round, Flores is able to dig his own underhook and circle off the cage and break the clinch. We’re back to range and Flores accidentally catches Bolaghi in the eye while looking to frame up.

Bolaghi takes a moment to let his vision clear up and we’re right back at it.  Bolaghi is doing a much better job with head movement and footwork and seems to be starting to solve the puzzle in front of him.  Bolaghi ends the round with a nice superman punch with his right and ends a close round with some damage for the judges.  Very competitive opening round.

Bolaghi jumps in with a lead hook and while it lands, he eats a nice cross from Flores on the counter.  They briefly enter the pocket and Flores attacks the body while Bolaghi throws a few short uppercuts.  Flores doing a good job moving laterally and not squaring his hips to a talented wrestler.

2 minutes down and Bolaghi is still controlling the center of the cage but he’s having some trouble getting inside on the longer, rangier Flores.  Flores loads up on a left, misses, and gets touched with a right in return from Bolaghi but it doesn’t seem to have a tremendous impact.

Flores would be wise to try to bank a few more of those heavy lead leg kicks, Bolaghi appears to be having trouble with them and it is beginning to affect his movement.

Bolaghi blasts an outside single and briefly gets the takedown.  Both men scramble and flip position twice and Flores is able to wind up on top, eventually able to get back to his feet and fire on the break.

Bolaghi appears a little frustrated at the lack of grappling success, and just like that he’s able to hit a nice outside trip to end the round on top getting off a little bit of ground and pound.

Another very close round, but Flores appears the fresher fighter at this point. Very good chance the fight is 1 round apiece going into the 3rd.

Bolaghi again looks to take the center and Flores lands a BIG overhand right that stops him in his tracks.

Bolaghi is ahead on strikes at this point 42-35 but that certainly doesn’t tell the whole story as Flores has had a bit more pop on his strikes.  1:20 in Flores lands a gorgeous 4-piece combo that seems to hurt Bolaghi and again gets him moving backward.

Not to be deterred, Bolaghi regroups, corrals Flores against the fence and is able to get the takedown.  He holds top position briefly but again Flores is able to work back to his feet without taking a significant amount of damage.

Halfway through the round and it’s been mostly Flores so far but still anybody’s fight.  Flores landing his jab well and snapping Bolaghi’s head back with it.  Flores has continued to use lateral movement very well and has made himself difficult to takedown.

With 90 seconds left, Flores lands a flying knee right up the middle and senses Bolaghi is hurt.  He chases and keeps the pressure on, blitzing with punches and kicks and forcing a panic shot out of Bolaghi.

Alejandro Flores is on the attack in the 3rd round!#2022PFL2 LIVE on ESPN+
🌎 https://t.co/jPNvomkWj8 pic.twitter.com/M203HzpZ6J

The sequence ends with Flores sprawling well and holding a front headlock where he can start threatening a D’arce/Anaconda choke.  Bolaghi is eventually able to work back to his feet and briefly takes Flores down again but cannot keep him there.  The fight ends with Bolaghi pressing Flores into the cage in the clinch.

To open the featherweight season, Alejandro Flores wins a unanimous decision and picks up 3 points to place him at the top of the standings for the time being!